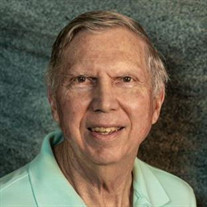 Robert Anthony Baldazzi, 76, of Ivins, Utah, passed away on February 4, 2020, in St. George, Utah. He was born on September 27, 1943, in Joliet, Illinois to Geno Baldazzi and Frieda Brulc Baldazzi. He married Linda Ann Morgan in Salinas, CA on July 24, 1971. Bob grew up and attended school in Crest Hill, IL. He graduated with a degree in electrical engineering from the University of Illinois at Urbana-Champaign. After college he started working for Firestone Tire and Rubber in Akron, OH. Shortly thereafter he was transferred to Salinas, CA, where he met and married Linda Ann Morgan. Together they had two children, David Robert and Gina Lynn Baldazzi. In 1973 he went to work for Hewlett-Packard, in Santa Rosa, CA, and then Spokane, WA, where he retired from after 26 years. Upon retirement in March 2000, Bob and Linda moved to Ivins, UT and spent the next 20 years hiking, playing golf, volunteering at the St. George Dinosaur Discovery Site and traveling the United States and Canada in their motorhome. He is survived by his wife of 48 years, Linda, daughter Gina, son David, daughter-in-law Katie and grandchildren, Phillip, Brooke, and Jocelyn, brother Fred Baldazzi and sister-in-law Carole. Bob was preceded in death by his father, Geno R. Baldazzi and mother Frieda Brulc Baldazzi. The family would like to thank the wonderful doctors, nurses and aides at the Dixie Regional Medical Center for their compassionate care of Bob during the last days of his life. In lieu of flowers the family requests donations be made in Bob’s name to the St. George Dinosaur Discovery Site or to Parkinson’s research. A Celebration of Bob’s Life will be held in the spring at a date and place to be announced.

The family of Robert Anthony Baldazzi created this Life Tributes page to make it easy to share your memories.

Robert Anthony Baldazzi, 76, of Ivins, Utah, passed away on February...

Send flowers to the Baldazzi family.