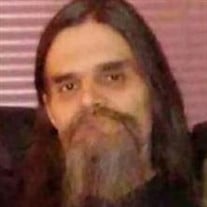 Robert Eugene Bill, age 52, passed away peacefully at his home after a yearlong battle with cancer. He was surrounded by his family at the time of his death. He was born on May 23, 1965 to Edward and Charleen Bill. Robert was raised in Syracuse, UT. He worked on the family’s dairy farm and was taught an excellent work ethic. He was not afraid of hard work. He married Kathy Sherwood in 1982, they had two children and were divorced in 1985. Robert then married Jodie Voivod in 1987, they had three children and were divorced in 2004. He then married Sara Davis in 2008, they had three children. Though never divorced, they have been separated since 2012. At the time of his death, Robert was in a relationship with his 2nd wife, Jodie. Robert was a certified mig/arc welder and was also a certified heavy equipment operator. He worked in excavation most of his adult life. Robert loved to go fishin’. He enjoyed riding ATVs and shooting guns. He saw beauty in things that others would overlook. He appreciated the beauty of a starry night and a beautiful sunrise. He was an excellent cook - Mr. Gourmet all the way - he took pride in his culinary creations. He loved the holidays and spending time with his family. He had the sweetest, most compassionate heart. If he could help someone, he wouldn't hesitate. He was a special man, loved by so many. We will miss you so much Robert. Robert is survived by his mother, Charleen Bill of Beaver Dam, AZ., his brother, Kirt (Becky) Bill of Preston, ID., his brother, Bart Bill of Beaver Dam, AZ. His children, Tina Rowe of Ogden, UT., Jessica (Jule) Kreyling of Washington, UT., Nicki Bill of Overton, NV., Gage Bill of Henderson, NV., Robert (Bubba) Bill of Washington, UT., Blade Bill of Washington, UT., McKelby Bill of Bunkerville, NV., and Tera Bill of Clearfield, UT. He is also survived by his companion and soul mate Jodie Bill of Washington, UT., three stepsons, Brody, Justin and Tristen Olive of Washington, UT., eleven grandchildren and numerous nieces and nephews. He is preceded in death by his father, Edward Bill, and two brothers, Gary Bill and Bert Bill. There will be a viewing on Friday, April 27, 2018 from 8:00 am to 9:30 am. At Serenity Funeral Home, 1316 S. 400 E. St. George, UT. With a graveside service following at Washington Cemetery, 300 Park View Drive, Washington, UT.

Robert Eugene Bill, age 52, passed away peacefully at his home after a yearlong battle with cancer. He was surrounded by his family at the time of his death. He was born on May 23, 1965 to Edward and Charleen Bill. Robert was raised in Syracuse,... View Obituary & Service Information

The family of Robert Eugene Bill created this Life Tributes page to make it easy to share your memories.

Robert Eugene Bill, age 52, passed away peacefully at his home...

Send flowers to the Bill family.