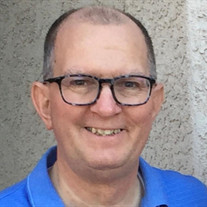 Robert Francis Crow, AKA-Bob, BC, Bobby, Bob the Builder, Bobby-o, was born in Los Angeles, CA on December 14, 1953. He passed away on August 9, 2018 after a courageous two-year battle with cancer. Bob was born to Aldon and Irene Crow and was the youngest of four siblings. He spent his childhood in southern California where he enjoyed sports and scouting. Bob served a mission for The Church of Jesus Christ of Latter-Day Saints in Portland, OR, where he met his future wife, Brenda. Bob and Brenda were married on April 24, 1976, and sealed a year later in the Oakland, CA temple. They have three children, Jennifer, Stephanie and Jordan. Bob worked in the auto industry for his entire career, specializing in parts. After 30 years in Oregon, Bob and Brenda relocated to sunny Southern Utah to be closer to family. Bob was a kind and dedicated husband, father, brother, uncle, employee, neighbor, and friend. He greeted everyone by their name and with a smile and was known never to forget birthdays, anniversaries or other significant events. The world was a better place because of him. He will be greatly missed. Bob chose to continue serving others, even after his death, by donating his body to the University of Utah for medical research. In lieu of flowers, please donate to your favorite charity. He is survived by his wife Brenda, their three children along with their spouses and six grandchildren who all adored him. Please join us in a celebration of his life on Saturday, August 18, from 2-4 p.m. with a program at 3 p.m. at the LDS Chapel at 290 East 1060 South (west building), Ivins, Utah. Casual dress, we encourage everyone to wear black, orange or OSU clothing in honor of Bob and his never-ending support as a Beaver Believer.

Robert Francis Crow, AKA-Bob, BC, Bobby, Bob the Builder, Bobby-o, was born in Los Angeles, CA on December 14, 1953. He passed away on August 9, 2018 after a courageous two-year battle with cancer. Bob was born to Aldon and Irene Crow and... View Obituary & Service Information

The family of Robert Francis Crow created this Life Tributes page to make it easy to share your memories.

Send flowers to the Crow family.