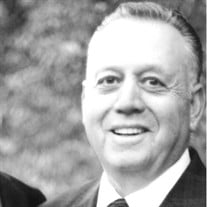 Robert Kent Davis, born January 18, 1945 completed his earthly test and passed on to greater things on May 19, 2020. He was preceded in death by his parents John A and Ada Davis and his brother William Kay Davis. He is survived by his son Daniel (Cari) Wall, daughters Jacquelynn (Harvey) Carmichael and Jeanna (Tony) Chiodo, grandchildren Alyssa, McKenna, Julian, Anthony, Hudson & Ava, sisters Shirlee (Rand) Packer and Jolynne (Harold) Black and numerous nieces and nephews all of whom he adored. Dad loved life and lived it to the fullest. In his youth and throughout adulthood, he loved to hunt, fish, rodeo, golf and snow ski. He was also a major sports fan. He loved watching Phil Mickelsen school the younger golfers second only to his love of watching football. He was a dyed in the wool Broncos fan but thrilled at the opportunity of watching the Seahawks and Vikings play in person when he visited Dan and Cari in Seattle and Jeanna and Tony in Minnesota. Dad rooted for all the Utah college teams as well as the Washington huskies. He was also a formidable card player who had a knack for turning a hand with “absolutely no possibilities” into a triumphant win. He was a Veteran who proudly served his country as a Seabee (Construction Battalion) with the Navy in the Vietnam War. Dad was an accomplished journeyman carpenter, with a special gift for pouring and finishing concrete and had an incredible work ethic. Some of his projects include the Virgin River Gorge between St. George and Mesquite and the ski lodge at Brian Head Ski resort which had to be poured in Las Vegas and transported to Brian Head. Dad’s work often led to falls from high places including getting knocked off a scaffolding into a field of rebar, getting hit with a crane, and falling off a few bridges. Fortunately, his luck at cards carried over into these near misses and aside from numerous broken ribs, lots of road rash and gravel in the back of his head, he managed to escape these potential fatalities with grace and a smile. Dad always had the best attitude. He was an optimist who saw the bright side of things. He never complained and was a humble man. While in his earlier years he might resort to Fist-a-cuffs if the situation required it, in his later years he would simply smile when someone was confrontational with him and suggest they add a bit more fiber to their diet. This kinder, gentler version of Dad was a work in progress that he started nearly 20 years ago when he turned his heart to his Savior Jesus Christ and never looked back. Since that time, Dad has dedicated his life to serving his neighbors, ward members, family and friends. He loved his church callings and taking care of and visiting the elderly and the sick in his ward. He was also a faithful temple worker and completed the work for hundreds of people on the other side. Dad’s sense of humor was matchless and his stories were legendary and fun to hear. He loved his family more than anything. Family, to him, was the most important thing in the world. He was a devoted father and grandfather and would tirelessly make the trek to Salt Lake, Seattle and Minnesota to visit his children and grandchildren. He was very proud of each of us and treated us like we hung the moon for him. He also fiercely loved his siblings, cousins, nieces, nephews and friends and took every opportunity he could to relay the latest news about each. He kept track of everyone in his family and was so proud of them and grateful to have them in his life. He loved visitors to stop in and stay with him in St. George. He loved visiting family away from home, and he never missed a funeral of any extended family member, no matter how far away they may live. He wanted to pay his respects and he always did. And, just like his mother, he never visited someone without bringing them something special. Dad had a strong testimony of the gospel of Jesus Christ and was not afraid to say so and share it with others when he could. He loved and admired Joseph Smith, our current prophet Russell M. Nelson and his savior Jesus Christ. He believed in the power of prayer and was faithful and diligent in his obedience to the commandments. He was also ready for whatever may happen and would often quote his favorite talk given by Elder L.Tom Perry when he would tell us: “I’m going to do everything I can to take care of myself and live a long life, but if Heavenly Father has something else in mind for me, “COME WHAT MAY AND LOVE IT.” Even though you were ready to go Dad, we were not yet ready to let you go. It’s just too soon. We will miss you more than you can imagine, but we smile and rejoice in the knowledge that you are with grandma and grandpa, your brother Bill and so many family members who passed on before you. We know you are having a wonderful reunion. We love you Dad. Funeral services will be held Saturday at 12:00 noon at the 12th Ward building, located at 449 South 300 East, St. George, Utah. A viewing will be held from 10:00 to 11:45 am. Due to covid 19 restrictions, the funeral may be limited to family only. Burial will take place at the Tonaquint Cemetery following the service.

Robert Kent Davis, born January 18, 1945 completed his earthly test and passed on to greater things on May 19, 2020. He was preceded in death by his parents John A and Ada Davis and his brother William Kay Davis. He is survived by his son Daniel... View Obituary & Service Information

The family of Robert Kent Davis created this Life Tributes page to make it easy to share your memories.

Send flowers to the Davis family.