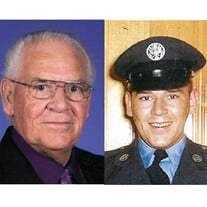 Robert S. Drabeck, age 84, peacefully passed on October 13, 2018, after a valiant fight with Alzheimer’s disease. He was born May 30, 1934 to Frank Drabeck and Mary Shalbert in Washington, PA. He met his wife, Joan Boensch, while living in Anchorage, AK. In 1982, they were married, blending their family of five children. In 1989, all the children were off on their own so Robert and Joan began their long planned desire to travel in their motor home and see the United States. Leaving Anchorage, they traveled for 10 years, meeting wonderful people and visiting the many historic and interesting sites each state had to offer. After traveling 10 years, they decided to buy a home in Las Vegas, NV. After 6 years of that busy lifestyle, they began looking for a quieter place to call home, finding Sun River in Saint George, UT. In Sun River, Robert was instrumental in starting the Horseshoe Club and enjoyed participating in community events, golfing, bowling, pitching horseshoes and taking cruises. Robert was proud of his active service in the U. S. Airforce, serving from 1952 to 1975. He worked as a sheet metal technician, repairing airplanes, then civil service at Elmendorf AFB/Fort Richardson, in Alaska. Robert was a member of the American Legion Post 142 in Sun River. Robert is survived by his wife, Joan, his children Wendy Drabeck Johnson (Roy Johnson) of Colorado Springs, CO, William Drabeck (Janna Tait) of Ivins, UT, his stepchildren Dawn Houghtaling Dalton (Jeff Dalton) of Arlington Heights, IL, Bert Houghtaling of Big Lake, AK., seven grandchildren, one great grandchild and sister, Delores Gerbliss of Canonsburg, PA. Robert was preceded in death by his son, Robert Drabeck of Bisbee, AZ, father, Frank Drabeck, mother, Mary Drabeck and brothers, Edward, Fred and Walter Drabeck of Washington, PA. The family would like to thank Southern Utah Veteran’s Home, Hall 400, for their kindness and loving care, as well as Community Nursing Services for their hospice care. In lieu of flowers the family requests donations be made to Memory Matters, 168 North 100 East, Ste. 104, Saint George, (435) 319-0407. Funeral services will be held on Friday, October 19, 2018 at 11:00 am at Saint George Catholic Church, 259 West 200 North, Saint George, UT. Lunch will be served at Kuzy Hall adjacent to the church, immediately following the service. Friends and family are invited to share condolences online at www.serenitystg.com. Arrangements and a memorial tree planting will be provided by Serenity Funeral Home of Southern Utah, (435) 986-2085.

Robert S. Drabeck, age 84, peacefully passed on October 13, 2018, after a valiant fight with Alzheimer&#8217;s disease. He was born May 30, 1934 to Frank Drabeck and Mary Shalbert in Washington, PA. He met his wife, Joan Boensch, while living... View Obituary & Service Information

The family of Robert S Drabeck created this Life Tributes page to make it easy to share your memories.

Send flowers to the Drabeck family.