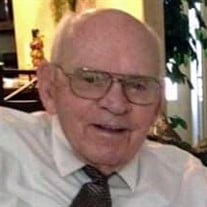 Robert Dean Francisco, 95, passed away on December 23, 2019 in St. George Utah from causes incident to age. He was born on July 26, 1924 in Douglas, Wyoming to Clyde M and Bernice B Smith Francisco. He married Jeannette Ellen Winn on November 21, 1947. They were sealed in the Salt Lake Temple on July 24, 1978. Robert was raised in a number of communities in Wyoming and in Farmington New Mexico as his family moved with his father’s job transfers. He graduated from Douglas High School in 1942 after recovering from surgery due to a sport injury, he attended the University of Southern California for a time and graduated from the University of Wyoming with a degree in Biology in 1949. He completed graduate education studies at the University of Washington and earned a teaching certificate in Biology teaching and coaching. Employment took him and Jeannette to Davenport Iowa where he worked for the next 30 years in the retail pharmacy and medical equipment sales business. After retirement in 1982 they moved to Douglas Wyoming to be closer to family. While in Douglas, Robert was appointed to the Converse County Hospital Commission and served as its chairman for several years working to improve health care in that part of rural Wyoming. For his service and advocacy of rural health care, he was awarded a life membership in the Wyoming Association. They eventually relocated to St. George, Utah and retired for real. Robert was baptized a member of the Church of Jesus Christ of Latter-day Saints in 1976 and served in a number of callings including Bishops counselor, Bishop, Gospel Doctrine instructor, and a number of positions working with the youth of the church in young men’s and sunday school. He enjoyed great satisfaction and happiness when working with the youth. He especially loved going camping and hiking with the Boy Scout troop and the Teachers Quorum explorer post. After retiring to St. George he spent many hours performing ordinance work in the St. George Temple and serving where needed in his ward. Robert is survived by his son James, daughter in law Elaine, and six grand children, Russell, Eric, Alex, Larrissa, Christian, and Spencer. He was proceeded in death by his beloved wife Jeannette and his parents. Funeral services will be held Saturday, January 4, 2020 at 11 a.m. at the Westridge Ward LDS chapel 415 Westridge Drive St. George, Utah. A visitation will be held from 10-10:45 a.m. prior to the service. Interment will follow at the Tonaquint Cemetery. Funeral services are under the direction of Serenity Funeral Home of Southern Utah. The family would like to express their appreciation and thanks to the staff of the Retreat at Sunbrook for the care and affection they gave our father during his decline and final illness.

Robert Dean Francisco, 95, passed away on December 23, 2019 in St. George Utah from causes incident to age. He was born on July 26, 1924 in Douglas, Wyoming to Clyde M and Bernice B Smith Francisco. He married Jeannette Ellen Winn on November... View Obituary & Service Information

The family of Robert Dean Francisco created this Life Tributes page to make it easy to share your memories.

Send flowers to the Francisco family.