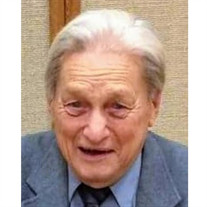 Robert Max Jensen passed away peacefully in his home in St. George, Utah on March 19, 2019, at the age of 87, surrounded by his loving family. Bob was born on December 21, 1931 to Nellie Frances Eyre and Nels Peter Jensen in Salt Lake City, Utah. He married his sweetheart, Elizabeth (Betty) Syphus on February 12, 1953 in St. George, Utah. Together they raised a large family which now exceeds more than 100 descendants. He and Betty lived most of their married lives Salt Lake City, Utah. Most recently they lived in Hurricane and St. George, Utah. Bob was preceded in death by his sweetheart Betty; his parents, Nels and Nellie Jensen; his two sisters Marjorie (Charles) Little, and Louise (Edward) Pedersen; and his brother Richard Ernst (Jessie). He is survived by his nine children, Alan Robert (JoNell), Elizabeth Ann (David) Armstrong, Carol (Kevin) Severinsen, Mark Edward, James Merlin, David Richard (Cindy), Joseph Nels (Michelle), Jean (Jeff) Ellsworth, and John Syphus (Alisha). He was a loving husband, father, brother, uncle, grandfather, great-grandfather and friend to all who knew him. Bob spent most of his early life moving around with his family, as his mother and father would purchase, renovate and then sell motels primarily in the state of Utah. He was a popular student who attended Dixie High School, Dixie College, and the University of Utah. He excelled in music and could learn how to play most any musical instrument in a very short period of time. He also was involved in the school theater productions and in athletics including football and swimming. He married his sweetheart in 1953 and one week later left to serve in the Korean War. After his safe return from the war, he and Betty lived in Salt Lake City, Utah where he spent most of his career as a commercial real estate broker. Bob had an inquisitive mind and loved to explore the deeper meaning and purposes of life. His greatest joy in life was being with his family. He will be greatly missed by all who knew him. We have peace in our hearts knowing that he has been reunited with his sweetheart Betty after a separation of more than four years. They were truly an inseparable pair whose love and selflessness was a great example to all who knew them. A viewing will be held at 9:30 am on Tuesday, March 26, 2019, at the Manzanita Ward of the Church of Jesus Christ of Latter-day Saints, 3519 Manzanita Road, St. George, Utah, followed by a funeral service at 11 am. Interment will be at the Tonaquint Cemetery, 1777 S. Dixie Drive, St. George, UT following the funeral service. Military honors will be provided by the American Legion Post 90. Funeral Services provided by Serenity Funeral Home of Southern Utah.

Robert Max Jensen passed away peacefully in his home in St. George, Utah on March 19, 2019, at the age of 87, surrounded by his loving family. Bob was born on December 21, 1931 to Nellie Frances Eyre and Nels Peter Jensen in Salt Lake City,... View Obituary & Service Information

The family of Robert Max Jensen created this Life Tributes page to make it easy to share your memories.

Robert Max Jensen passed away peacefully in his home in St. George,...

Send flowers to the Jensen family.