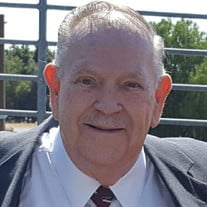 On April 16th 2020 Robert Lee Jones, husband, father, grandfather and great grandfather, passed gently into the hands of his savior, thru the Church of Jesus Christ of Latter-Days Saints. Robert, affectionately known by his close friends as “Bob”, lived in Toquerville, Utah with his beloved wife Carol, for the past 35 years. Bob and Carol migrated to St. George to get away from the hustle and bustle of the city. After visiting the St George UT area several times earlier they fell in love with the small town of Toquerville and decided to sell their home in California and move in permanently. Bob was a “Yankee-Doodle” boy having been born on the 4th of July 1934 in Preston Idaho. He was the youngest boy of 8 siblings from parents Evan and LaVerna Jones and spent most of his youth in Mt. Clemens, Michigan before they moved to Salt Lake City. While growing up in Salt Lake City Bob met the love of his life, Carol, and they were married on April 18th, 1952 and started a family of their own. Bob enlisted in the Air Force where he and Carol traveled to, and lived on, multiple Air Force bases across the United States where he served as a senior technical and electrical specialist. He was honorably discharged on Dec 31st, 1956 and set out to make a career utilizing his military training as a mechanic and technician. As his family grew to 5 (with the addition of 3 children) they bought a house and settled in the San Francisco Bay Area of California. Robert landed a very good job at General Motors Corporation where he advanced in the Union Skilled Trades area to become a “Journeyman Millwright” and Union Representative. Bob was very proud of being a Millwright and he was always sharing stories around the dinner table of how he and the other skilled tradesmen kept the huge GM plant in Fremont running while it produced 52 automobiles each hour, 7 days a week. Bob and Carol were avid bowlers and he and Carol bowled multiple times a week sometimes being on 2-3 Leagues at the same time. As kids we all remembered hanging out at the bowling alleys with our cousins while mom, dad, aunts and uncles were racking up strikes and spares in quest of the perfect 300 game. Dad’s favorite card game was Cribbage. He was incredibly competitive in everything, especially in games, and hated to lose. Sometimes card games with the family lasted well into the night and frequently turned into heated discussions around a particular rule, lack of rules, unwritten rules and sometimes new rules. In recent years he resorted to bringing a rule book with him so he could quickly point out the flaws in play. While not known for his great sense of humor, Bob would often surprise the entire family with spontaneous imitations of popular radio show personalities such as “Wolf-Man Jack” or “Amos and Andy”. It was also fun to listen to him share situational or satirical stories he recalled while growing up with his sisters. Anyone that knew Bob well understood he was an obsessive, compulsive perfectionist. There was no board cut too straight, no picture too level, no measurement too accurate, and no dish too clean that he could not improve upon it even if it met spending hours and hours of his and your time to apply his brand of love to it. Sometimes it was difficult to determine if this was a gift or a curse for him; perhaps it was both. Bob retired in 1984 and he and Carol moved to Toquerville, UT where they continued to be active bowlers even after a slew of old injuries and age began to take a toll on their mobility. As Robert grew older his love of the LDS church grew stronger and so did his faith. Robert is survived by his wife Carol of 68 years; 3 children, Darwin, Ricky and David; 5 grandchildren, Colleen, Devon, Erik, Heather and Nathan; 2 great grandchildren, Brayden and Conner. Graveside services will be held 1:00 p.m. Monday, April 20, 2020 at the Toquerville City Cemetery. A private family viewing was held.

On April 16th 2020 Robert Lee Jones, husband, father, grandfather and great grandfather, passed gently into the hands of his savior, thru the Church of Jesus Christ of Latter-Days Saints. Robert, affectionately known by his close friends as... View Obituary & Service Information

The family of Robert L. Jones created this Life Tributes page to make it easy to share your memories.

Send flowers to the Jones family.