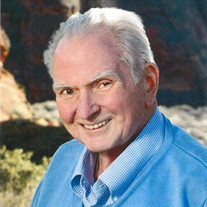 Robert (Bob) A. Lakin, 88 retired Director of Metropolitan Area Planning Department and former resident of Wichita, KS, died May 29, 2020 in St. George, UT. He was born March 30, 1932 in Ponca City, OK, the only child of Allan B and Dorothy Pearl Mock Lakin. He graduated from Wichita North High School in 1950, earned a bachelors degree from Wichita University in 1954 and received a commission from ROTC as a Distinguished Military Graduate. He served in the U.S. Army, Medical Service Corps 1954-1956 and in the reserves 1956-1960. He married Joyce Louise Silvey in 1954. They had one daughter, Valerie Anne. They were later divorced. In 1967 he married Carol Schmeidler, who survives him. After leaving active duty, he briefly worked with Northwestern Mutual Life Ins. Co. and then went to work in the City of Wichita, City Clerks Office. While working for the City, he did graduate work in Political Science at Wichita State University. He transferred to the Wichita-Sedgwick County Metropolitan Planning Department as a Planner and steadily advanced to become the Director of the department in 1970. He retired from that position in 1985. Subsequently, he worked for Sedgwick County as the Director of Recreation and Parks. After leaving Sedgwick County, he was a Realtor with The Martens Companies selling commercial real estate. In 1995 he and his wife retired to St. George, Utah where he was involved in the Celebrity Concert Series, and the Southern Utah Acoustic Music association. He is survived by his wife Carol; daughters, Valerie Anne (David) Smith and Susan Hale of Wichita; Connie (Jeff) Mork, of Aurora, CO; and son Robert (Ann) Schmeidler of Wichita, KS; six grandchildren, and nine great-grandchildren. He was preceded in death by his parents and son Raymond Lee Schmeidler. Per Robert’s wishes, there will be no services. A private family memorial will be held at a later date in Wichita, KS. Robert may be remembered by gifts to Kansas Special Olympics, South Central Area; 3153 West Maple, Wichita, KS 67213 or Sierra Club, Utah Chapter; 423 W. 800 South, Suite A103, Salt Lake City, UT 84101. The family would like to thank Integrated Senior Care Hospice, the staff, but especially Carlos and Sonia for their tender, loving and compassionate care.

Robert (Bob) A. Lakin, 88 retired Director of Metropolitan Area Planning Department and former resident of Wichita, KS, died May 29, 2020 in St. George, UT. He was born March 30, 1932 in Ponca City, OK, the only child of Allan B and Dorothy... View Obituary & Service Information

The family of Robert (Bob) A. Lakin created this Life Tributes page to make it easy to share your memories.

Send flowers to the Lakin family.