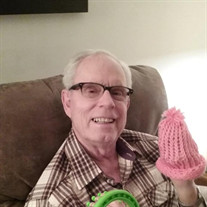 Robert A. Moore was born March 14, 1932, to James J. and Geneva Christensen Moore in Fountain Green, Utah. At age 89 he died on May 19 in St. George, Utah surrounded by his family. Bob grew up in Provo and graduated in 1950, the year North Korea invaded South Korea and like many young men of his era he spent the next four years in the service of Uncle Sam’s Air Force with a year at Kimpo Air Base in Korea repairing reconnaissance cameras. He came home with an appreciation of higher education and he used the GI Bill to earn a BA at BYU, an MA at Long Beach State and a PhD at BYU and spent 24 years as a professor at Southern Utah University teaching in the Business Department. Before teaching he was a contract administrator at Hughes Aircraft in Fullerton, California negotiating multi-million dollar contracts with the United States Department of Defense. Bob’s greatest pleasure was his family, marrying his high school and lifelong sweetheart Jean Anderson in 1955. They are the parents of three children; Karen (Bobby) Weidmann, David (Jon) Moore, and Pamela Katter. They have eight almost perfect grandchildren and eleven perfect great-grandchildren. The family loved traveling together and they managed to visit all 50 states, Canada, and Mexico in five summers. Bob was a devout member of the Church of Jesus Christ of Latter-day Saints, gaining his testimony in the small town of Salina, Kansas, while serving as first counselor to the Branch President while still in the military. Later on Bob and Jean served a mission to the MTC as language coordinators and at Kona, Hawaii as Church Education Service Missionaries. When they came home they asked to be Temple Attendance Patrons and attended the Temple once a week for as long as they could. A true Renaissance man, he mastered fencing, raised miniature horses, restored cars, boats, and motor homes, built one home and one mountain getaway cabin from the dirt up. He enjoyed vegetable gardening, fishing, cooking, cruising, and traveling. He dabbled in art, sewing, built a dulcimer, and built rocking horses. In his later years he learned to make baby hats which he donated to hospitals. He and his son took part in an Honor Flight for veterans to Washington DC, which he considered a spiritual high in his life. He used the last few years of his life as a force of positivity, his common response to “How are you?” was “Happy,” and “Excellent.”

Robert A. Moore was born March 14, 1932, to James J. and Geneva Christensen Moore in Fountain Green, Utah. At age 89 he died on May 19 in St. George, Utah surrounded by his family. Bob grew up in Provo and graduated in 1950, the year North... View Obituary & Service Information

The family of Robert Arthur Moore created this Life Tributes page to make it easy to share your memories.

Send flowers to the Moore family.