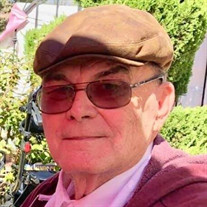 Ivins, Utah – 1st Sgt. Robert E. Senecal Jr., 74, formerly of Jefferson City, MO, passed away on December 14, 2018 at the Southern Utah Veterans Home. He was born on March 12, 1944 in Bakersfield, CA to Robert E. Senecal Sr. and Bessie I. Senecal. Robert Jr. met Patricia Kier at Jack in the Box and rescued her from spinsterhood (his words). They were married in American Fork, Utah on August 1, 1981. He joined the Navy just in time for the Vietnam War. When he finished his tour with the Navy, he joined the Army, then Army Reserves, finally retiring in 1994. He went on to college, earning several degrees. Among his many hobbies were watching sci-fi movies, “dirty books" (his phrase for sci-fi and mystery books), building model planes, dates with his wife, cooing at random babies, and naps with the dog. Robert is survived by: his wife, Patricia Senecal, his children, Elizabeth Casey (Brandon Casey) of Jefferson City, MO, Joseph Senecal (Tara Barnett-Senecal) of Columbia, MO, and Kathleen Kutch (Justin Kutch) of Farmington, CT; his grandchildren, Rasai Senecal, Tristan Kutch, Ephraim Kutch, and Aurora Kutch; and his siblings, Linda Bothwell (Jamie Bothwell – deceased) and Nancy Adams (Dee Fallen). He was preceded in death by: his mother Bessie Senecal, father Robert Senecal Sr., and brother Christopher Senecal. The Senecal family would like to thank the wonderful staff at the Southern Utah Veterans Home and Zion's Way Home Health & Hospice. In lieu of flowers, please donate to the Wounded Warrior Project. Funeral services were held on December 19, 2018 in an intimate gathering of immediate family only at Serenity Funeral Home of Southern Utah with military honors.

The family of Robert E Senecal created this Life Tributes page to make it easy to share your memories.

Send flowers to the Senecal family.