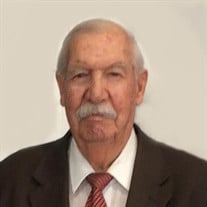 Rodney Alma DeMille passed away in the early morning hours of November 14, 2019, at the age of 88, from natural causes. Rodney was born on August 05, 1931, to Alma DeMille and Henriette Farnes in Cedar City, Utah He was the youngest of 8 children. On May 25, 1950, he married his high school sweetheart, Helen Stratton in the St. George LDS Temple. He was a faithful member of The Church of Jesus Christ of Latter-day Saints and had a strong Testimony of its teachings. He faithfully fulfilled his church callings. He continued to pass on his feelings of the savior to his children, throughout his life. Rodney thoroughly enjoyed the time that He spent working at the St. George LDS Temple. His early youth was spent out among the beautiful picturesque hills of Rockville, Utah. One of his fondest childhood memories, was riding horseback alongside President George Albert Smith, when President Smith visited the small town of Shonesburg. He enjoyed the close association he had with his brothers and helping his father ranch and farm in Schonesburg. He often spoke fondly about the ranching and farming abilities of his father and the Angelic nature of his sweet mother. It was during this close association with his brothers and father that he developed a love for the outdoors, hunting, fishing and shooting. Rodney continued to pursue his interest in shooting and became a very proficient marksman. He was often found talking about his favorite sport of shooting, with those that had the same interest or would sit long enough to listen. Some of the highlights of his life were spending time with his sons hunting, fishing and hauling wood. He was always happy to pass on his love of the outdoors to his boys. It was a blessing to his sons to have a father who mentored them about the outdoors and at the same time, draw close to them. Rodney and Helen were blessed with four boys and one daughter (Susan), who brought a special joy and tranquility to their family of all boys. Rodney was employed with Utah International in Cedar City, Utah for 30 years. During his employment at the iron mines, he developed many close and lasting friends. Several years after retiring from Utah International, he was asked to oversee the operations of the Hurricane Utah LDS Welfare Farm. During his 13 years there, he had the privilege of meeting many wonderful individuals coming to the Welfare farm, volunteering their time and services, picking peaches. Rodney is survived by his wife Helen of 69 years and his children, Craig (Wilma); Susan Gubler (Charles); Kevin (Valerie Jill); Kent (deceased); Kirk (Rona); 25 grandchildren and 60 great-grandchildren and 1 great-great grandchild. He was preceded in death by his parents, Alma and Henriette DeMille, brothers; Ferron and Carl DeMille; sisters, Erma Bruner, Myrl Vinson, Wanda Calderwood, Doris Woodbury and Eldona Sterling. One great grandson; Bronson Kaden DeMille.The family Wishes to express their appreciation to Zions Way Home Health and Hospice And the Beehive Assisted living Center in Hurricane. A PRIVATE GRAVESIDE SERVICE WILL BE HELD FOR THE FAMILY on November 19, 2019 At 11:00 A.M. Interment will be in the LaVerkin City Cemetery.

Rodney Alma DeMille passed away in the early morning hours of November 14, 2019, at the age of 88, from natural causes. Rodney was born on August 05, 1931, to Alma DeMille and Henriette Farnes in Cedar City, Utah He was the youngest of 8 children. On... View Obituary & Service Information

The family of Rodney Alma DeMille created this Life Tributes page to make it easy to share your memories.

Rodney Alma DeMille passed away in the early morning hours of...

Send flowers to the DeMille family.