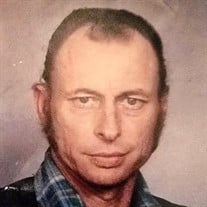 Roland Orton, age 74, passed away on Tuesday, Oct. 30th, 2018, in St. George, Ut. after his courageous battle with Alzheimer’s and C.O.P.D. He was born in Cedar City, Utah on Aug. 4th, 1944, to Harold Done and Mary Elco Orton. He was the 2nd oldest of seven children. Although his life was short lived, Roland accomplished many things; he served his country, he was a skilled Boilermaker, and a golden glove boxer. But if you ask him, his greatest joy was his family. Roland will be sorely missed by all who knew him. He will be greeted with open arms by his Parents and his brother Harold Orton Jr. and all of the loved ones who passed before him. Roland is survived by his wife, Mary Katherine Orton, his children, Nanette Bowers, Stephanie Orton Peterson, and Gregg Roland Orton, nine grandchildren and eleven great grandchildren. Surviving siblings are Gloria Cummins, Vicki Davis, Tamara Robertson, Kirk Orton, and Kelvin Orton. A celebration of life will be held on Friday, Nov. 9th, 2018 at the Far West Chapel, 320 North 3400 West in Hurricane, Utah. The viewing will begin at 9:30am until 11am, followed by the funeral service from 11am until 12pm. Interment will take place at 1pm on Nov. 9th, 2018 at the Hurricane City Cemetery.

The family of Roland Gubler Orton created this Life Tributes page to make it easy to share your memories.

Send flowers to the Orton family.