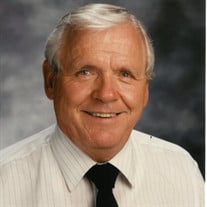 Ronald Buster Anderton, 88, of Washington, Utah, passed away on March 20, 2021, with his wife, Muriel Anderton, son and daughter-in-law, Kirk and Bonnie Anderton, by his side. Ron was born on July 23, 1932, in Elsinore, Utah. He was the 14th of 15 children born to James William Jr. and Clara May Nunley Anderton. He grew up in Salt Lake City and attended both South High and West High Schools. Ron spent four years in the United States Air Force serving as a weather man in Japan and the United States. As a Korean War veteran, he participated in the Utah Honor Flight in May 2019. Following his military service, Ron met and married Janice Patricia Davis on August 12, 1955. They were later sealed in the Salt Lake City Temple on June 5, 1963. Together they have three children--Holly, Kirk, and Liesa—and raised them in Salt Lake City and American Fork, Utah. Ron graduated from the University of Utah and spent many years teaching elementary school. He had a love of reading and books and shared that love with his students. Ron loved gardening and could often be found battling his arch nemesis (the morning glory) or working in his amazing garden. He was a faithful member of the Church of Jesus Christ of Latter-Day Saints. He served three full-time missions and also served as an ordinance worker in the St George Temple. Ron had the unique ability to make everyone feel special and loved. Whether he was playing cards, making up songs, doing sudoku or just sitting and visiting he could always bring a smile to your face or, more often, a bout of laughter. He was a devoted husband, father, step-father, grandpa and friend. He is survived by his wife, Muriel Ekins Grant Anderton; brother, Ted J (Norma) Anderton; son, Kirk (Bonnie) Anderton; daughter, Holly Anderton; step-children, Michelle Cook, Pam (Peter) Michaelson, Michael (Lisa) Grant, Steven Grant, and Krishna (Tom) Jones; 33 grandchildren and 30 great-grandchildren. He was preceded by his parents James William Jr. and Clara May Nunley Anderton; siblings Ray (Cathaleen) Anderton, Vivien, Carol (Bud) Laturner, twins Theo and Cleo, Walter, Faye (Charles) O’Niel, James Wallace, Betty, Bob (Charlotte), Sally (Ken) Huffman, Donald, and Gerald; first wife, Janice Patricia Davis; and daughter, Liesa. Funeral services will be held Thursday, March 25, 2021 at 11:00 a.m. at the Washington Fields North Stake Center, 3167 E 1140 S St. George, Utah. A visitation will be held prior to services from 9:30-10:30 a.m. at the Stake Center. Funeral services will be available live stream at http://mywebcast.churchofjesuschrist.org/Events/stgeorgeutahwashingtonfieldsnorthstake. Interment with military honors will take place at Larkin Sunset Gardens, 1950 E. 10600 S; Sandy, Utah on Friday, March 26, 2021, at 12:00 noon. Family and friends are invited to share tributes online at www.SerenityStg.com. Arrangements and memorial tree planting by Serenity Funeral Home of Southern Utah, 435-986-9100.

Ronald Buster Anderton, 88, of Washington, Utah, passed away on March 20, 2021, with his wife, Muriel Anderton, son and daughter-in-law, Kirk and Bonnie Anderton, by his side. Ron was born on July 23, 1932, in Elsinore, Utah. He was the 14th... View Obituary & Service Information

The family of Ronald Buster Anderton created this Life Tributes page to make it easy to share your memories.

Send flowers to the Anderton family.