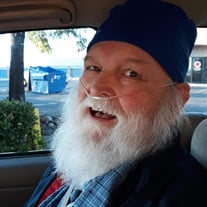 On Monday, July 12, 2021, the love of my life, Ronald Gregg Barry, surrounded by his family, passed away peacefully into the loving arms of our Lord and Savior Jesus Christ. He was the best Son, Husband, Father, Grandfather, Great Grandfather and Friend. We were blessed to have had him in our lives and even though he may not be with us he will never be forgotten. Ronald was born on March 5, 1950, the second of three children to Dorsey Louis Barry Sr. and Norma Jean (Bowers) Barry, in Alhambra, California. He grew up in Southern California and Kansas City, Missouri, graduating in 1968 from Gary High School in Pomona, California Ronald married Brenda Fincher, being blessed with three children, Tammie, Gregg, and William. They later divorced. He then met the love of his life Celia (Nelson) Barry and was married on August 13,1977, being blessed with two children, Richard, and Kathryn. Ronald worked in the Envelope Manufacturing Industry for 43 years and was well known throughout the industry, traveling the country to train others. He began his career at Gilmore Envelope Corporation in Southern California at nineteen years of age, working his way up into management. After twenty-one years with Gilmore Envelope Ronald decided to relocate his wife and two children, including his in laws Cecil and Leona Nelson to Northern California. Ronald then applied at Quality Park Products in Sacramento, California and was told he was overly qualified for the position of an adjuster. He was able to convince the Manager that he wasn't overly qualified, and they created a special shift for him. Quality Park products then decided to relocate out of California and Ronald was asked to relocate with the company to St. George, Utah in May of 1993. He helped dismantle and reassemble the machinery once it was shipped to St. George. He climbed the ranks of day shift foreman to Quality Parks trainer, traveling to Quality Parks other facilities to train others. He retired from the industry in 2013. Ronald loved to camp and go fishing. He had many wonderful memories camping and fishing with his family and friends at South Lake outside of Bishop, California. He so loved his family and enjoyed teaching his children to love the outdoors as much as he did. Ronald loved our Lord and Savior Jesus Christ with all his heart and soul, sharing Christ love and kindness, and helping others. Ronald is preceded in death by his parents, Dorsey Louis Barry Sr., and Norma Jean (Bowers) Barry, brother; Dorsey Louis Barry Jr., sister; Marilyn Debra (Barry) McCoy, In laws; Cecil Stanley and Leona Lee (Chesney) Nelson, brother-in-law; Joseph Leon Nelson, niece; Katie Jo Nelson, brother-in-law; Dana Jay Nelson and granddaughter Adalin Grace Bradshaw He is survived by his wife Celia (Nelson)Barry; Children, Tammie (Chuck)Barry, Gregg (Rhonda)Barry, William (Tyra)Barry, Richard Barry, and Kathryn (James) Bradshaw. Grandchildren; Michael Barry, Shane Koch, Steven (Jennifer)Koch, Kayla Barry and Zoe Barry, Great Grandchildren; Alyssa Barry and Ezekiel Koch, Sister-in-law Sandra Barry; Brother-in-law Eugene (Rick)McCoy; Brother-in-law Stanley Nelson; Brother-in-law Joseph's widow Katy Nelson and many nieces and nephews A Celebration of Ronald's life will be Saturday, September 18, 2021, 4:00 p.m. at Grandpa's Pond 350 North 3700 West Hurricane, Utah

On Monday, July 12, 2021, the love of my life, Ronald Gregg Barry, surrounded by his family, passed away peacefully into the loving arms of our Lord and Savior Jesus Christ. He was the best Son, Husband, Father, Grandfather, Great Grandfather... View Obituary & Service Information

The family of Ronald Gregg Barry created this Life Tributes page to make it easy to share your memories.

Send flowers to the Barry family.