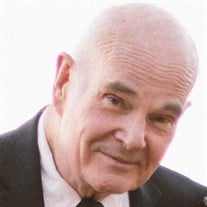 Ronald “Rick” Frederick Conely, Sr., 78, passed away peacefully at home on July 4, 2021 surrounded by his family in Toquerville, UT after a long battle with idiopathic pulmonary fibrosis. He maintained a hopeful and fighting attitude that he would improve until the end. He was born November 10, 1942 in Salt Lake City, UT to Fred and Venice Conely. Rick was raised in Holladay, UT and attended Olympus High School, Class of 1960. He served his country for two years in the US Army during the Vietnam War where he began to learn drafting. Upon his return, he attended the University of Utah and studied architecture. Rick married Patricia B. Conely in 1964, and they had 4 beautiful children together. He worked for his father at Aquatech Pools and Spas, then took over Sprinklers, Inc. a sprinkler installation and repair business. He and Pat divorced in 1979. Rick married Karen Hildy Conely on December 2, 1988. Rick and Karen worked at and grew Sprinklers, Inc. into a highly respected and well known company in the Salt Lake Valley until they retired in 2000 and relocated to Toquerville, UT. In 2002, Rick converted to The Church of Jesus Christ of Latter-Day Saints. He and Karen were sealed in the St. George temple a year later. Together, they served in the St. George Temple. Rick was often seen providing service around Toquerville with his close friend, Reese Straw. More recently he could be found on his back porch swing or in his favorite chair with his two faithful companions, Punky the Chihuahua and Brutus the Dachshund. Rick loved old, antique cars and collected many in his young adult days including a 1957 Thunderbird and a 1932 Packard. He was an avid outdoorsman. He enjoyed camping, hiking, deep sea fishing, fly fishing, and big game and waterfowl hunting. He loved going to Mountain Man Rendezvous, exploring old ghost towns, finding treasures at swap meets and garage sales, and relaxing on the beach at his house in Mexico. He liked to go rock hunting in Braffits and Cedar Mountains with his wife, Karen, and good friend, Julie Powell. He enjoyed lapidary and silversmithing and taught many classes on jewelry making at the St. George Recreation Center. He was a collector of many things including rocks, hats, Native American art and textiles, and books. Rick is survived by his lovely wife and the best thing that ever happened to him, Karen Hildy Conely, his children Rick Conely, Jr., Mindy Hintze, Richard Conely, his step-children Phillip (Sharon) Fowler, Mark Fowler, Lisa (Scott) Carter, Beth (Mike) McGuire, 19 grandchildren, 3 great grandchildren, and his sister Cindy (Brett) Garn. Rick was preceded in death by his sons Todd M. Conely and William “Bill” S. Conely, his son-in-law Jeffrey R. Hintze, and his parents Fred and Venice Conely. The family would like to thank the members of the Toquerville 1st Ward, Karen Straw of Summit Home Health and Hospice, Pache Self, OT, Jesse Williamson, RN, Nancy Welty, PT, Colton from Advantage Oxygen, and Jake Golden from Lincare Oxygen for their compassionate care of Rick and support to the family. Memorial services will be held on Monday, July 19, 2021 at the Toquerville 1st Ward located at 63 Toquerville Blvd, Toquerville, UT 84774. Family and friends may call on the family at 10:00 am MDT. Services will begin at 11:00 am MDT. Services will be live streamed. Please email Mindy Hintze at [email protected] to receive the login information.

Ronald &#8220;Rick&#8221; Frederick Conely, Sr., 78, passed away peacefully at home on July 4, 2021 surrounded by his family in Toquerville, UT after a long battle with idiopathic pulmonary fibrosis. He maintained a hopeful and fighting attitude... View Obituary & Service Information

The family of Ronald Fredrick Conely created this Life Tributes page to make it easy to share your memories.

Send flowers to the Conely family.