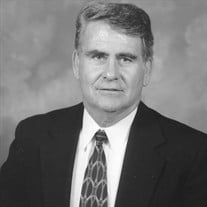 Ronald Dennis Matteucci, age 79, was called to Heaven on Friday, March 13, 2020. He passed peacefully in St. George, Utah, surrounded by his loving family. Ron was born June 21, 1940 in Great Falls, Montana to Joseph Louis Matteucci and Sarah Ann Rearden. He attended school in Great Falls, where he was a gifted all-around athlete. He excelled in basketball and football, earning First Team All-State Honors and an Honorable Mention All-American Football Honor. Choosing to delay his dream of becoming a professional athlete, he enlisted in the US Army and was stationed in Darmstadt, Germany. It was there that he met and married the love of his life, Inge Margarete Mueller on December 31, 1960. Inge and her handsome soldier moved to Great Falls where their three children Irene(Pitz), Susan(Schrauben) and Dennis Matteucci were born, and Ron gained employment as a football and basketball coach for St. Mary’s School. Ron would go on to attend the University of Great Falls, earning degrees in Chemistry and Math. Ron was an incredibly hard worker and very driven. His long career as an apprenticeship coordinator began with the Montana Sheet Metal Workers Union, which led to a position with the U.S. Department of Labor. This work would relocate his family to Denver, Washington D.C., Saudi Arabia, and ultimately to Utah where he became the State Director for the Department of Labor's Bureau of Apprenticeship and Training. He retired in 2002 and moved to St. George. Ron and Inge loved to travel the world, and upon retirement they traveled the nation in their RV. Memorable trips included their Pilgrimage to Medjugorje with a group of friends from the St. George Catholic Church, where they were dedicated parishioners. Their final adventure would be to Ireland in 2018. Ron loved the outdoors and the family spent many summers fishing, boating and camping in Montana and Colorado. Ron's love of sports would continue all of his life. He coached his children's Little League and Football teams, and was a huge fan of the Denver Broncos, the Utah Jazz, and any sports team his grandkids were on. In spite of all of his many accomplishments, Ron was a very modest individual and dedicated his life to family, volunteering, and service. Some of his favorite activities included volunteering annually for the Huntsman Games, and as a bell-ringing “Santa” for the Salvation Army. Ron was a member of the Elks Lodge, and a 4th Level Knight of Columbus. Ron would go out of his way to help his family and friends. He will be remembered for his strength, infectious smile, sense of humor, generosity, compassion, and his extremely strong moral compass. Ron is survived by his wife of 59 years,Inge, his children Irene (Raymond), Susan (Mark) and Dennis (Debbie) his grandchildren Nicholas, Derek, Dana, Laura, Sarah, and his brother James. He was preceded in death by his parents, and sisters, Joanne Yuhas, and MaryLou Lovchik. A celebration of life will be held Friday, March 20th at 2pm in St. George, Ut., at Serenity Funeral Home 1316 S. 400 E. #A3 , St. George, Utah 84790 . Military honors will be provided by the American Legion. Internment will be held at a later date in Great Falls, MT. Family and friends are invited to share tributes online at www.SerenityStG.com. Arrangements and memorial tree planting by Serenity Funeral Homes of Southern Utah. The family would like to thank the nurses and staff at Dixie Regional Medical center for their compassion and support. In lieu of flowers, the family requests donations be made in Ronald’s name to the American Cancer Society.

The family of Ronald Dennis Matteucci created this Life Tributes page to make it easy to share your memories.

Ronald Dennis Matteucci, age 79, was called to Heaven on Friday,...

Send flowers to the Matteucci family.