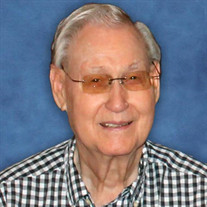 Rowland Hinton was born on November 10, 1937, to John Leslie Hinton and Ruth Milne Fawcett Hinton at home in Hurricane, Utah. He died on August 13, 202,1 at home in Hurricane, Utah. He married his sweetheart, Judy Price, in the St. George Temple in 1961, and they became the parents of four wonderful children, John, David, Ronald, and Diane Hinton Scow (Kurt). It was also his privilege to have two other special people as part of his family, Viola Kenny Romero of Fort Defiance, AZ (an Indian placement student for eight years), and Ásgrímur Helgi Einarsson of Reykjavík, Iceland. They both came on a temporary basis but remained in Rowland and Judy’s hearts and family forever. Rowland loved music. He often sang in church even as a youth, either solos or duets with his mother and later in various ward choirs. He participated in several different quartets, he was in the high school chorus, had a part in an opera, and sang at his high school graduation. Music was not his only interest. In his youth he played on the football team, acted in several plays, participated on the high school debate team, and was elected class president during his Junior year. He enjoyed yard work, gardening, and being outdoors. After receiving his degree in 1964 from Utah State University in Logan, UT, he began his teaching career in Alamo, Nevada, where he taught all the courses to a combined seventh and eighth-grade class, coached the boys’ basketball team, and drove the school bus. He loved his experience in Alamo, teaching there for a year. However, when the opportunity to return home to work arose, he moved his family to Hurricane where he taught math for 31 years. Rowland was a talented and loving man who lived a life of service and faith. He served a mission for the Church of Jesus Christ of Latter-day Saints in the East Central States Mission from August 1959 until August 1961. He served faithfully in many different church callings, including Bishop of the Hurricane 4th ward, First Counselor in the Hurricane Stake Presidency, St. George Temple ordinance worker, family history center missionary, and tri-stake young adult leader. Rowland’s greatest love was his family. He is remembered by all who knew him for his testimony, his kindness and patience, his service and love, and his endearing sense of humor. He is survived by his loving wife, Judy, his sons, John (Michele), David (Michelle), Ronald (Paige), and Ásgrímur (Sirrý), as well as 19 grandchildren and five great-grandchildren. He was preceded in death by his parents; his siblings, Junior Hinton, Gloria Hinton, Joyce Adams, and Leslie Hinton; and his daughters, Diane Hinton Scow and Viola Kenny Romero. A viewing will be held Saturday, August 21, 2021, from 9:30am to 10:30am at The Church of Jesus Christ of Latter-day Saints Stake Center located at 677 South 700 West, Hurricane, UT. Funeral services will follow at the same location at 11:00am. Services will be streamed live for those who cannot attend at: https://www.youtube.com/channel/UCRZl5Wfuqt2D-4KALG8clbw/live. Starting at 11:00am. Family and friends are invited to share condolences online at www.SerentiyStG.com. Arrangements are under the direction of Serenity Funeral Home of Southern Utah, 435-986-9100.

The family of Rowland Hinton created this Life Tributes page to make it easy to share your memories.

Send flowers to the Hinton family.