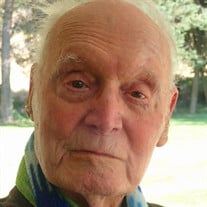 Rupert Edward Clark, 99, passed away peacefully on October 16, 2020 in Hurricane, Utah after a brief battle with Covid-19. He was born on July 24, 1921 in Chicago, Illinois, to Rupert Peter and Ruth Mackway Clark. Known as "Eddie" by his family, Rupert grew up in southern Indiana with his parents and five siblings. In 1942, he graduated from Purdue University with a Bachelor of Science Degree in Agriculture. From 1942 to 1945 he served in the US Army during World War II in Casablanca, Morocco as an aircraft mechanic and remained there as a civilian until 1947. In Morocco, he met his first wife, Paulette Emanuelli, daughter of a French colonel whose family lived in Casablanca, and they were married in 1947. Returning to the United States, he earned Master's and PhD degrees from Cornell University by 1952. They moved to Le Sueur, Minnesota, where he worked as a researcher for the Green Giant Company. Favoring a warmer climate, Rupert and Paulette moved to Artesia, New Mexico in 1957 where their three children, Philippe, Anne-Marie and Martin were born. Rupert worked for New Mexico State University in an agricultural research station. The family moved to Lahore, (West) Pakistan in 1965 where Rupert was an agronomy consultant to Harza Engineering. A war between India and Pakistan in 1966 caused his assignment to be cut short. While he stayed behind to complete his work, the family lived in a hotel in Tehran, Iran. The family reunited in the summer of 1966 in Washington, DC. In 1967 the family moved to Lyallpur (now Faisalabad), (West) Pakistan where Rupert taught agronomy at the West Pakistan Agricultural University through the USAID program. Returning to Artesia in 1969, Rupert went on agricultural assignments to Tunisia and India. Rupert started teaching at Artesia High School. In 1974 the family moved to Taos County, New Mexico, where he taught science in the Taos Public Schools. In 1979 Rupert taught in an American school in Nicaragua. In 1980 Rupert married Erlinda Diaz, from Nicaragua, and moved to Huntington Park, California. Rupert became known as "Clarcito" to his Nicaraguan family. In 1982, Rupert taught middle school in the Los Angeles Public Schools until his retirement. When Erlinda passed in 2015, Rupert moved to assisted living in Page, Arizona. After suffering a broken arm in 2017, Rupert moved to a nursing home in Hurricane, Utah until his passing. He was well liked by both the staff and residents. Rupert never lost his curiosity in science and math and even in retirement he kept busy writing, raising Japanese quail, electronics, geometry, math and science. In the nursing homes he would help staff members with math and science homework and would entertain them with his stories. Rupert is survived by his children, Phil(ippe) Clark (Kimberly) of Page, Arizona, Anne-Marie Emanuelli (Bruce Gomez) of Taos, New Mexico and Martin Clark of Denver, Colorado, stepson Orlando Diaz (Denis Carpenter) of New York City, grandchildren, Paul Clark of Alamosa, Colorado and Marielle Gomez of Taos, New Mexico, brothers Raymond, Alfred and Arthur Clark, sister Dorothy Zumhingst and numerous nieces and nephews. He is also survived by his 'adopted' children and grandchildren, Salvador and Anita Soza of Downey, California, and three 'adopted' grandsons, Jose, Michael and Eric. He was preceded in death by his parents, wives, and sister, Grace Robertson. The family would like to thank Beehive Homes in Page, Arizona and Hurricane Health and Rehabilitation in Hurricane, Utah for providing him a home and care. The family especially thanks Dr. Jose Soza, DO, Rupert's 'adopted' grandson, for his help in understanding and obtaining the best hospital care during Covid-19 treatment. The family extends its thanks to the Dixie Regional Medical Center in St. George, Utah and all of the doctors, nurses and specialists who helped him into his 100th year. Services will be held September 13, 2021 at 12:45 p.m. MDT at the National Cemetery in Santa Fe, New Mexico. Family and friends are invited to share condolences and tributes online at www.SerenityStG.com. A memorial tree will be planted in the Dixie National Forest, Utah in his honor. In lieu of flowers, the family requests that donations be made to the Khan Academy, which offers free online education resources for parents, students and teachers in science, math, computing, and other subjects. khanacademy.org

Rupert Edward Clark, 99, passed away peacefully on October 16, 2020 in Hurricane, Utah after a brief battle with Covid-19. He was born on July 24, 1921 in Chicago, Illinois, to Rupert Peter and Ruth Mackway Clark. Known as "Eddie" by his family,... View Obituary & Service Information

The family of Rupert Edward Clark created this Life Tributes page to make it easy to share your memories.

Send flowers to the Clark family.