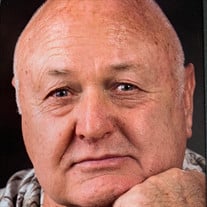 Russell Banks Hewett. Born in Long Beach, CA, he died at age 85, on April 25, 2021 in St. George, UT, just shortly after his wife, Carol D. Hewett. Russ was a devoted husband and family man. He is survived by his 5 children, 30 grandchildren and 24 great grandchildren. When Russell married his second wife, Carol, he extended his circle of love and admiration out even further, to include her children, grandchildren and great-grandchildren. He set a high bar for those of us who follow after him. He chose to live his life with honesty and integrity, always. He was honorable in all his endeavors. Few on Earth have served more faithfully than he. Russ served in the Army during the Korean War. He was young but it was there that he began his life of service for the sake of others. Next, he served as a missionary in Australia, for the Church of Jesus Christ of Latter-day Saints. Later, he met and married the love of his life, Elaine D. Hewett. Russell and Elaine built a life together with their 5 children, Michael K. Hewett, Christy K. Packer, Jonathan K. Hewett, James R. Hewett and Peter K. Hewett. Russ became a contractor, building beautiful custom homes and eventually relocated from city life to rural Alturas, California. He learned how to ranch and farm by reading books and by being brave enough to try. Throughout it all, he served as a life-saving firefighter in San José, California, commuting long distances to make it all work; eventually retiring as Captain. Russell leaves a legacy of a shining testimony of the Savior, Jesus Christ and for Heavenly Father’s Great Plan for Happiness. He could ALWAYS be counted upon to choose the right and be immoveable in his desire to please his Heavenly Father. Throughout his life, he opened his home and heart as an Anchor Place; a place of refuge and shelter. Though he never gave himself credit for the good that he did, instead reflecting on his perceived shortcomings and frailties, we knew. We always knew. Once, he was here with us and we were the recipients of his keen wit, teasing banter and warm regard. Now we are left with memories and tender feelings. He is worthy of the space he holds in our hearts and in our minds. We love you forever! A memorial service will be held Saturday, May 22, 2021 at 11:00 a.m. at the LDS chapel 1560 S. 1100 W., in Provo, UT. Interment with military honors will follow at the Orem City Cemetery. Family and friends are invited to share condolences online at www.SerentiyStG.com arrangements are under the direction of Serenity Funeral Home of Southern Utah, 435-986-9100.

Russell Banks Hewett. Born in Long Beach, CA, he died at age 85, on April 25, 2021 in St. George, UT, just shortly after his wife, Carol D. Hewett. Russ was a devoted husband and family man. He is survived by his 5 children, 30 grandchildren... View Obituary & Service Information

The family of Russell Banks Hewett created this Life Tributes page to make it easy to share your memories.

Send flowers to the Hewett family.