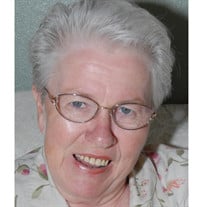 Santa Clara, Utah – Ruth Edna Wood Carter, 85, was born October 9th,1933 in Parkdale, Oregon, near Hood River, to Walter Miles Wood and Edna Jeanette Mills. Ruth died August 20th, 2019 at her home in Santa Clara, UT. She was raised in Oregon and began working with her father in the truck gardens when she was about eight years old. She met the love of her life, Jerry Blaine Carter, in high school in Lyle, Washington. Ruth and Jerry were married when she graduated school on February 21st, 1953. They lived on his parent’s ranch in southern Washington before moving to The Dallas, Oregon, then Milwaukie, Oregon before retiring to Santa Clara, Utah in 1997. They were blessed with four children and during their childhood she was a stay-at-home mom, and very good at it. After her children were grown she worked for a few years cleaning houses and then in a investment office. Ruth loved to sew, cook and crochet. She was always good at anything creative. She liked to read and spend time with her children, grandchildren and great-grandchildren. Jerry and Ruth joined The Church of Jesus Christ of Latter-Day Saints in 1966 and Ruth held many callings, including Primary President, Relief Society President, Camp Director, Young Women’s President and her favorite, Greeter in Sacrament meeting. Jerry and Ruth served a Senior Mission at the historical sites of Kirkland, Ohio and St. George, UT. Ruth is survived by her children, Debra (Dennis) Ruitenbeek. Stockton, CA, William (Joelle) Carter, Troutdale, OR, Janet (David) Dalling, Summerville, SC and Patricia (Matthew) Blake, Santa Clara, UT, 14 grandchildren and 37 great-grandchildren. Ruth’s first great-great granddaughter will join the family in October. Ruth is also survived by her sister, Wilma Kinzie, St. George, UT and her brother, Robert Wood, Jerome, ID. Ruth was preceded in death by her husband of 65 years, Jerry Carter, who passed last June 30, 2018, her parents Walter and Edna Wood, and her siblings, Norma, Lucille, Jocille, Mary, Verna and Walter. The family would like to thank Encompass Health – Home Health and Hospice for the wonderful care they provided for Ruth the last few months. Funeral services will be at 11:00 a.m. on Saturday, August 31st at The Church of Jesus Christ of Latter-day Saints at 3815 Rachel Drive in Santa Clara, UT. There will be a viewing from 9:00 a.m. to 10:30 a.m. on the same day. Interment will be at the Santa Clara City Cemetery.

The family of Ruth Edna Wood Carter created this Life Tributes page to make it easy to share your memories.

Send flowers to the Carter family.