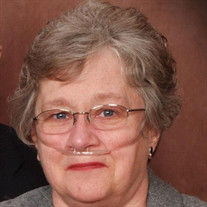 Ruth Ann Hoff Plumb, passed away peacefully on October 10, 2021, in her home in Washington, UT. She was born March 19, 1950, in Bloomington, IL to La Nora Hood Bingham and Floyd Robert Bingham. She was later adopted by Barbara Ashby Bingham... View Obituary & Service Information

The family of Ruth Ann Plumb created this Life Tributes page to make it easy to share your memories.

Send flowers to the Plumb family.