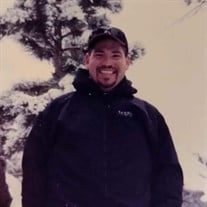 Sandy B Lee, 52, passed away on December 23, 2021, in St. George, Utah, due to untreated complications from surgery. He was born in Nuremberg, Germany on May 10, 1969, to Kenneth B Lee and Kathleen Sandy Ann Cheney Lee. Sandy and was the oldest of the Lee children. Sandy spent most of his childhood in Utah and Washington State. As a teenager, his family moved to Mesa, Arizona. At the age of 25, Sandy moved to Henderson, Nevada, where most of his family had relocated to years earlier. On September 3, 2010, Sandy married his sweetheart, Shannon, in Las Vegas, Nevada. He had a quick wit, a dark humor and loved all things outdoors. His favorite memories from his childhood were in Washington State. There, with his younger brother, Trevis, he spent countless hours fishing the docks on the Puget Sound, exploring the woods, and getting into whatever mischief they could find. He spent his last few years of life exploring the mountains and beaches of the Hawaiian Island of Kauai with Shannon and his beloved dog, Umi. He was always up for an adventure. He loved hiking, camping, fishing, shooting, and cooking. An avid fisherman and music lover, Sandy was a gentle giant who, despite many years of severe medical conditions, always made time to lend an ear and give advice to others. Anyone who knew Sandy knew he was one of the strongest people they have ever met. He found a way to conquer any obstacle he encountered in life. At age 26, he was diagnosed with end stage renal failure, which he fought for the last half of his life living on dialysis and undergoing multiple surgeries. He continued fighting, even after losing his transplant to a virus. Sandy returned to live in St. George in late October 2021 to be near his family again. He loved spending time with family. Any time Sandy was with his family, he was undoubtedly laughing and sharing stories with his siblings about their childhood. He loved to tease others and would often do or say things just to get a reaction. Entertaining his nieces and nephews brought him so much joy. He leaves behind his wife, Shannon, his stepsons, Sean and Brian, his mother, Kathie, brothers Trevis (Angela) and Bret (Angie) as well as sisters Tamaree and Tara (Jason), and many nieces and nephews whom he adored. He was preceded in death by his youngest sister, Tonja and father, Ken. One of his favorite songs, The Highwayman, closes with the lyrics, “...And when I reach the other side, I'll find a place to rest my spirit if I can.” While his loved ones miss him beyond measure, we know he is finally pain free. His spirit is at peace, resting in heaven.

Sandy B Lee, 52, passed away on December 23, 2021, in St. George, Utah, due to untreated complications from surgery. He was born in Nuremberg, Germany on May 10, 1969, to Kenneth B Lee and Kathleen Sandy Ann Cheney Lee. Sandy and was the oldest... View Obituary & Service Information

The family of Sandy B Lee created this Life Tributes page to make it easy to share your memories.

Send flowers to the Lee family.