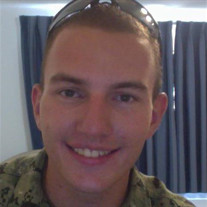 Washington, UT – Beloved son & brother, Saxon Von Daughton, 27, passed away on November 21st 2019, in Washington, UT due to clinical depression. He was born March 10th 1992, in Cedar City, UT to Lori Cragun and Philip Daughton. Saxon was raised in Washington, UT, where he graduated high school at Pine View High. He resided in Washington and neighboring cities until he joined the Navy at the age of 19. He was active duty for 5 years. This was during an especially difficult time for him and his family, and he took great care in ensuring his mother and sisters were fully provided for. During his service in the Navy, he worked as a diesel mechanic, and he lived in various areas including Maryland, USA and Rota, Spain. He was a man so full of life and energy, anyone who knew him was struck by his energy and sense of humor. With a big smile, and crack of a joke, he could turn your whole day around. He enjoyed many outdoor activities such as snowboarding, hiking, camping, rafting, archery, axe throwing, etc. He also had a strong interest in science and engineering, continually looking into the latest in technology. This fueled his passion for upgrading and modifying computers, cars, etc. He adored spending the holidays with friends and family. For instance, dressing up and participating in Halloween activities, and his giving spirit especially shined during Christmas. He had a big heart and had much love for all animals, especially dogs; as he aspired to be a dog trainer. Saxon did not belong to any particular church or religion; however, he did have Christian values. He recently took to praying for solace and guidance, and that helped to some degree. Unfortunately, he still succumbed to the overwhelming pressures of depression. He is survived by his mother Lori Cragun, and his three sisters: Melodie, Tori, and Noelle Daughton. He is preceded by his maternal grandmother Sandra Saunders. The family would like to recognize that there are many people who offered comfort and compassion toward Saxon. Furthermore, they would like to acknowledge with exceptional gratitude: the Henriquez family, for including and embracing Saxon as one of their own for so many years. Celebration of Life Service will be held on Saturday, November 30th at 1 pm at Serenity Funeral Home, 1316 S. 400 E. #A3 & A5 in St. George, Utah 84790

The family of Saxon Von Daughton created this Life Tributes page to make it easy to share your memories.

Send flowers to the Daughton family.