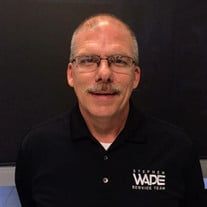 Scott Edward Huffman, age 57 of Saint George, Utah, passed away peacefully at home on May 25th, 2020 following a brief but courageous fight with leukemia. He was born on February 26th, 1963 in Baltimore, Maryland to Patricia Ann Workley and Charles Clinton Huffman. He worked for Jones Junction Automotive for 30+ years as a parts technician and manager. It was there he met best friend and love of his life, Wendy Lynn Anis. Married in September of 1990, together they raised a beautiful daughter, Jourdan Lindsey Huffman. Scott had a great love of the outdoors and enjoyed hiking, kayaking, fishing, and snorkling. He and Wendy shared many fabulous adventures due to his keen sense of direction and gift for creating awesome trip itineraries. This love of nature led the couple to Saint George, Utah in May of 2017. Scott was an avid reader, something he and his mother shared a love of. He enjoyed history, travel, fiction, guide books, trivia, NASCAR, and the game show Jeopardy. He loved the Lord and read the Bible often. Scott was known for his quick wit, approachable demeanor, and kind compassionate spirit. He found a job and a second family in the employees of Stephen Wade Automotive. Specifically the Nissan and Chrysler Jeep stores, where in 3 years he grew to love and respect many. Scott was preceded in death by his mother, Patricia, father, Charles, grandparents Edward and Madeline Workley, Buford and Evelyn Huffman, and sister in law, Laurie Jo Ring. He is survived by wife Wendy, daughter Jourdan, loving Westie Riley, brother Charles "Chuck" Huffman, sister Robin Anderson, as well as several nephews, nieces, aunt's, uncle's, cousins, and cherished friends. Thank you to all that supported us through this journey. A tree will be planted in Southern Utah's Dixie National Forest in honor of Scott Edward Huffman.

Scott Edward Huffman, age 57 of Saint George, Utah, passed away peacefully at home on May 25th, 2020 following a brief but courageous fight with leukemia. He was born on February 26th, 1963 in Baltimore, Maryland to Patricia Ann Workley and... View Obituary & Service Information

The family of Scott Edward Huffman created this Life Tributes page to make it easy to share your memories.

Send flowers to the Huffman family.