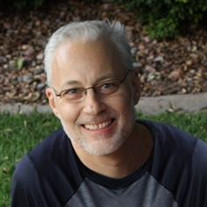 Scott Stephen Rich, 51, passed away on April 4, 2021 at his home after a valiant battle with biliary cancer. Scott was born on July 1, 1969 in Apia, Western Samoa to Stephen K and Helen Joan Allen Rich where he received the nickname “Sikoki”. He was the oldest of four children and was raised in Liberty, Utah. Scott attended North Ogden Elementary, Valley Elementary, Valley Junior High, and graduated from Weber High School in 1987. He served a mission for The Church of Jesus Christ of Latter Day Saints to the Illinois, Chicago Spanish Speaking Mission. Throughout his life he faithfully served others in his church. Scott had a passion and gift for anything computer related. He got his first computer for Christmas at the age of ten. His parents were livid when they found his brand new computer torn apart into hundreds of pieces the day after Christmas. It didn’t take him long to rebuild his computer and become an expert on how computers work. His first “real” job was working for a computer company in Ogden every Saturday as a 7th grader explaining to customers how computer programs worked. His love of computers motivated him to graduate with a bachelor’s degree in Information Technology & Business Education from Weber State University. He later started his own business specializing in network implementation and management for small government entities. He named his business, ApiaTech Information Technologies, after his birthplace. He also worked with different companies managing their networks and loved his final workplace Chartway Federal Credit Union. They valued him, his work, and his expertise. Scott married the love of his life, Dana Marie Enz on August 26, 1995 in the Salt Lake City, Utah Temple. Together they have five beautiful children. After living in the Ogden area for most of their lives, Scott and Dana relocated their family to St. George, UT, twelve plus years ago to escape the snow. Whatever Scott did, he did well. He loved coaching competitive boys’ gymnastics at BareFoot Gymnastics where he was privileged to train his own sons and help them compete. He loved being outdoors. He enjoyed biking, hiking, camping, building his camp trailer, and spending time with his family. Family meant the world to Scott. He supported his own family, friends, and extended family at every important event. Scott was kind to everyone and had a heart larger than life. Scott is survived by his sweet wife Dana, his children McKenna, Keston, Cameron, Connor, and Avery, his parents Steve and Helen Rich, siblings Jeff (Carolyn), Kent (Ellie), and LeNisha (Toby) Wright, and many nieces and nephews. Scott was preceded in death by his father-in-law Robert J. Enz, Sr. and one brother-in-law Robert J. Enz, Jr. Funeral services will be held at the Sunset Stake Center, located at 82 North Dixie Drive in St. George, Utah on Saturday, April 17, 2021 at 11:30 am. There will be a Celebration of Life preceding the funeral services at 10:00 am. The family wishes to give a special thanks to all the doctors, nurses, and hospice workers who lovingly cared for Scott. In lieu of flowers the family requests donations be made to the Scott S. Rich memorial fund at Chartway Federal Credit Union.

Scott Stephen Rich, 51, passed away on April 4, 2021 at his home after a valiant battle with biliary cancer. Scott was born on July 1, 1969 in Apia, Western Samoa to Stephen K and Helen Joan Allen Rich where he received the nickname &#8220;Sikoki&#8221;.... View Obituary & Service Information

The family of Scott Stephen Rich created this Life Tributes page to make it easy to share your memories.

Send flowers to the Rich family.