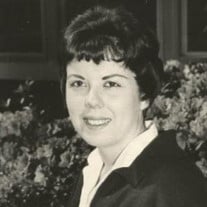 Sharon Lee (Julius) Pearce June 24, 1940 – October 10, 2021 Sharon Lee (Julius) Pearce, 81, of Ivins, Utah, passed away peacefully on October 10, 2021 in her home in Layton, Utah. Sharon was born June 24, 1940 in Sanger, California, to Michael and Loretta May (Deaver) Julius. She was a member of The Church of Jesus Christ of Latter-day Saints. She graduated from El Rancho High School in Pico Rivera, California. Sharon joined The Church of Jesus Christ of Latter-day Saints when she was 16 years old. On March 25, 1961, she married Arlo Woolley Pearce in the Los Angeles LDS temple. They lived and raised their two children in Lakewood California. Following her retirement from Long Beach City College in Long Beach, California, She and Arlo moved to Ivins, Utah. They loved their new home and the new friendships they made. Sharon was kind, gentle and soft-spoken, with a profound love for her Savior, Jesus Christ. To know her was to love her. She served in many callings for The Church of Jesus Christ of Latter-day Saints, including President of the Relief Society, Young Women’s and Primary organizations. Later in life she served as a temple worker in the St. George Temple, which may have been her favorite. Sharon loved the beauty of the earth which surrounded her. From her home in Ivins, she would often gaze at the wonderful view of the Southern Utah red mountains through her picture window and feel so blessed. Later in life, she would travel to many beautiful destinations worldwide with her daughter, Jody, such as Australia, Panama, Mayan Riviera, Banff, Canada, the New England states and Hawaii. Sharon is preceded in death by her husband – Arlo Woolley Pearce and her parents – Michael and Loretta May (Deaver) Julius. She is survived by her two children - Darren (Katie) Pearce, Jody (Matthew) Patterson; her grandchildren – Randi (Coby) Johnson, Cody (Lany) Watkins, Tanner Watkins, Jacob Watkins, Maggie Pearce and Ava Pearce; great grandchildren – Cade, Crew, Aniston, Elle and Mae Johnson, Ryder and Indie Watkins: and her siblings – Noreen (Ron) Bates, Kathleen Nanez, Michael Julius, and Robert Julius. Funeral services will be held Friday, October 15, 2021, at 11:00 a.m. at the Ivins 3rd Ward LDS Chapel, 240 East 1060 South, Ivins, UT. A visitation will be held prior to the service from 9:30 to 10:30 a.m. Interment will follow at the Ivins City Cemetery. Family and friends are invited to share condolences online at www.SerenityStG.com. Arrangements are under the direction of Serenity Funeral Home of Southern Utah, 986-9100. Live steam link via Zoom: https://us06web.zoom.us/j/82831103786?pwd=RXNCRGg1RUp1RW84OFpaaWZ0aXpQQT09 Meeting ID: 828 3110 3786 Passcode: 465908

The family of Sharon Lee (Julius) Pearce created this Life Tributes page to make it easy to share your memories.

Send flowers to the Pearce family.