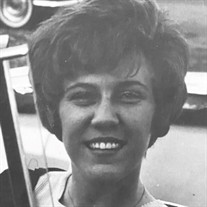 Loving wife and mother Sheryl (Schlappi) Henkel of St, George, Utah, age 76, passed away on January 13, 2021. She was born on August 17, 1944 to Andrew and Zerma Schlappi in Delta, Millard County, Utah. She married Bernd (Bernie) Rudolf Henkel December 19, 1964 in the Salt Lake Temple. Sheryl grew up in Delta, Utah and attended Delta High School. Her father, Andrew Orson Schlappi, died of leukemia when she was nine years old. Zerma later remarried, Oliver C. Tripp on Nov. 15, 1960. After graduating from high school she moved to Callao, Utah where Zerma and Oliver ran the famous 6-Mile Ranch. It was there that her love for all animals grew to be a driving force in her life. She loved horses, dogs, and all of God’s creatures. Oliver quickly became her strong, devoted father and mentor, teaching her to love the Lord and love ranching. Sheryl loved her family, and she especially adored her cousins—all of them are boys. Wydell, Keith, Milton, Steve, Bruce, Lester, and Marion were like her guardian angels. They watched over and took care of her as if each were appointed to be her surrogate father. Her cousin Milton was her best friend. They practically did everything together. The two were inseparable. Milton died in a drowning accident while hunting. This was the second time that she had lost someone so close to her. Having many callings in The Church of Jesus Christ of Latter-Day Saints, she served many years as Primary president in the Bennion ward, in Bennion, Utah. She was completely devoted to her family. As team mom she gave leadership and direction for all team fundraisers and provided the foundational support to many of the athletes on the swimming teams, soccer clubs, football, waterpolo, and cheer teams. She was a key person in Parowan to help expand Christmas in the Country, the city’s annual holiday event. Helping grow its influence and notoriety, she loved her community. Sheryl and Bernie were team players when they decided that the city of Parowan needed a memorial flag pole which they both funded, built and garnered support for. Most recently our mother is well known as one who’s compassion and sincere caring as Relief Society president for her current ward. She is adored and loved by many friends and neighbors. She is preceded in death by her husband, Bernie who passed away December 25, 2019. Sheryl is survived by her son, Scott Bernd Henkel (Melissa), of Vineyard and her daughter Michelle Henkel Orton (Kevin), of St George. She has 13 grandchildren and three great grandchildren. The family would like to thank the many friends and neighbors of West Springs who loved her dearly. And, a very special thank you to Mary Strawn for her constant care and devotion she gave our mother this last year. Due to COVID restrictions a formal funeral service will not be held. A viewing will be held at 6:00 p.m. Thursday, January 28 at the Serenity Funeral Home 1316 S 400 E #A3, St. George, UT. A graveside ceremony will be at the Parowan Cemetery at 1:00 pm on Friday, January 29, 2021.

The family of Sheryl Henkel created this Life Tributes page to make it easy to share your memories.

Send flowers to the Henkel family.