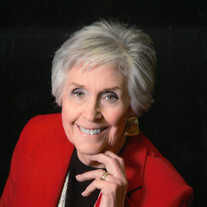 Shirlee Mae Killpack Last, our beloved mother, grandmother and great grandmother passed away in her home surrounded by her children on January 14th. She is one of the many victims of the Coronavirus. Shirlee was born in Ferron, Utah, the second child, to a local farmer/rancher, Alton Bradley Killpack, and Zina Mae Scott, a school teacher, on November 25, 1932. She lost her father due to appendicitis when she was 9 months old. She spent most of her young life in a coal mining town in the mountains of Carbon County. During the Depression it was the only teaching job available to her single mother. After eighth grade, rather than take a 70 minute bus ride twice a day for school, Shirlee lived with her grandmother on the family farm outside of Provo to attend High School. She had a special relationship with her grandmother. She felt loved and important with her. She graduated from Lincoln High School in Orem and moved on to BYU pursuing a teaching degree. Two years into her schooling a most fortunate thing for all of us occurred. Her older brother happened to be a bunkmate with a Garth Last during the Korean War. The brother had a photo of Shirlee in his wallet. The end result was a marriage in the Manti temple March 26, 1953. Shirlee and Garth graduated from BYU in 1955. By then two children, Greg and Danna were born into the family. Shirlee taught fourth grade for 3 years while Garth was in medical school and until Brad was born. Paula was born in Spokane, Washington where Garth completed his medical education. After Garth’s residency, he chose Hurricane to set up his practice. While this proved to be an ideal place for the family Shirlee was somewhat hesitant to move to this hot, dusty, rural area. However, characteristically she adapted to the community and quickly came to love the area and especially the people here. Becky, Ken and Ginnette were born here. Shirlee loved all of the fine arts. She worked with other community members to bring cultural programs here. She took her children to most theatre productions at Dixie College - especially the musicals. She was an early supporter of the Shakespeare Festival and made sure her children had a chance to see the plays. Along the way she collected one of the foremost private art collections in the area. She was happy when she could talk about her various paintings, sculptures, and pottery. Shirlee, through the years, had a number of significant church callings and civic commitments. She had a deep and abiding faith that she shared with friends and strangers alike through the years. Her children and grandchildren were always blessed with her confidence in things spiritual. As a dedicated spouse to a busy country doctor and in an era before pagers and cell phones, she learned to calm worried patients when her husband was not immediately available. With her passing many lost a trusted, kind, empathetic friend. Shirlee had an amazing ability to connect with people. She visited others extensively throughout her life. She enjoyed people from all walks of life, from governors to the least politically connected, from saints to sinners, from the old to the young. She treated all with respect, kindness and was completely without prejudice. She saw the good in all. Many will miss the times when Shirlee would come by for an unscheduled visit, often with a friend or grandchild. She is preceded in death by her husband, Garth, who died in 1993. A brother, Scott passed on in 2018 and a brother Dexter in 1970. She is survived by a brother, Douglas (Sherry) Olsen, Casper, Wyoming and by her seven children: Greg (Patsy) Hurricane; Danna (Kelly) Esplin, Cedar City; Brad (Jan) Hurricane; Paula, Salt Lake City; Becky (Roger) McOmber, Colleyville, Texas; Ken (Carolyn) Golden, Colorado; Ginette (Roger) MacDonald, Hurricane. She is also survived by two foster daughters: Karolyn Romero, Blanding, and LaVerne Bennett, Window Rock. She has 24 grandchildren and 30 great grandchildren. The family would like to thank those who have sent cards and condolences. We especially thank her kind neighbors on Sycamore Lane and Pecan Avenue for their attentiveness toward our mother through the years. Circumstances require a family only graveside service which will be held at 2:30 PM on Thursday, January 21st. The family apologizes for the private service for we know that many have a special connection to our mother and would otherwise attend. We invite anyone to share any condolences or special memories of our mother at SerenityStG.com

Shirlee Mae Killpack Last, our beloved mother, grandmother and great grandmother passed away in her home surrounded by her children on January 14th. She is one of the many victims of the Coronavirus. Shirlee was born in Ferron, Utah, the second... View Obituary & Service Information

The family of Shirlee Last created this Life Tributes page to make it easy to share your memories.

Send flowers to the Last family.