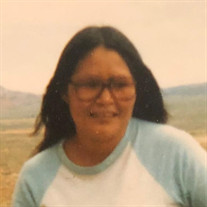 Washington City, Utah – Shirley Ann Edgewater Dominguez, 57, passed away on December 25th, 2018, in St. George, Utah. She was born on September 18, 1961, in Shonto, Arizona to Grace Bronston and Leo Edgewater. She married Jubentino Dominguez. They were married in Washington City on January 24th, 2003. Shirley was born and raised in Shonto, Arizona in a Hogan on the reservation. Growing up she loved to spend time with her family she always had a story to tell or two about her childhood. She attended Shonto Boarding School (1966-1976) she also was in the boarding school placement program and they took her to Indio, California where she also attended school (1976-1978). She returned home after her placement program and she helped raise her younger siblings. In March of 1980 she gave birth to her first daughter Marcella. Shirley has been through lots of battles and trials throughout her life and she was tough, never gave up she left that impact on many of us. In 1994, she moved to St George where she lived up until her passing. She took care of her nieces and nephews, then she got together with Tino in 1996. They were together until Tino passed in July of 2013, in May of 2001 Shirley gave birth to Tino’s only child Maria then in January 2003 they got married in the Washington City Courthouse. Up until her passing she took care of her parents, children, family, and friends. Shirley was always a caring, loving and supporting woman. She was always there for anyone who needed a place to stay with food to eat and all her love to give. Shirley was truly an amazing woman and she will always be loved and missed by everyone. She attended and believed in the Native American traditions, as well as the LDS Church. The family would like to say thank you to the doctors, nurses, and everyone at the Dixie Regional Hospital.The family would like to thank all those who have shared their love and support during this difficult time. She was preceded in death by her father Leo Edgewater, her Husband Tino Dominguez, her grandparents Sam and Viola Edgewater, and Billing and Hazel Bronston. She is survived by her two daughters Maria and Marcella, her mother Grace, her siblings Sarah, Leroy, Sally, Leonard and Irene, and many more. A Celebration of Life service will be held at 446 East Mangum Road Washington, Utah 84780 on Friday, December 28th 2018 from 5pm to 7pm. Friends please join at 5 to celebrate the wonderful life of Shirley. There will be no graveside service Shirley is being cremated and buried in a family plot in Arizona. Remembrances may be made in the form desired by friends can be made to Maria Dominguez at 501 North 200 East Trlr 34 in Washington, Utah 84780.

The family of Shirley Ann Edgewater Dominguez created this Life Tributes page to make it easy to share your memories.

Send flowers to the Dominguez family.