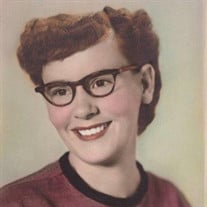 Shirley Schmutz Larkin (87) passed away September 25, 2021, at her home in St. George surrounded by her husband and children. Shirley was born January 19, 1934, in Middleton (Washington) Utah in a small home on Highway 91. Her parents were Grant Schmutz and Jessie Terry Schmutz. She married Donald Joseph Larkin on June 18, 1954, in the St. George Temple. Her parents had a small farm and orchard and Shirley enjoyed picking and shipping fruit, helping with the livestock, milking the cow, and swimming in their irrigation pond nestled against the red cliffs enclosing their property. She had always hoped to become a nurse and after her training she worked at the Dixie Pioneer Memorial Hospital to support her husband on his mission to the Great Lakes. She especially enjoyed working with the newborn babies and their mothers. Much as she loved nursing, her true desire was to be a mother. (She once said she wanted a dozen!) As children came, Shirley stopped working as a nurse to become a fulltime homemaker. Still, she felt the need to contribute and began to tend additional children for working mothers. She found it easier to tend her own kids if they had other kids their own age to play with. She had a natural gift for working with children and they responded with their own love and accepted the discipline she administered so kindly. As her success with kids was recognized, she became besieged with requests far beyond the 8-10 she could work with. She is still loved and revered by her “kids”, who would invite her to graduations, marriages, etc. and come by to show their own kids the “Crow’s Nest” and “Tree House” they remembered so fondly. Shirley continued her work with children as a primary teacher and Cub Scout Den mother, taking her charges on hikes to “Fossil Ridge” and other fun local places. With her own family, she enjoyed all outdoor activities, gardening, hiking, camping out, and even deer hunting. She worked with her 5 boys to see that they each attained the rank of Eagle Scout and taught all her kids cooking skills. Her love and example fostered success in her children, all of whom are active in the church. Not having the opportunity to travel much outside of Utah earlier in life, after she “retired”, she enjoyed accompanying her husband on numerous concert tours with the Southern Utah Heritage Choir, including the Midwest, Carnegie Hall, England, Czech Republic, Ireland, Armenia, China, etc. In 2004 – 2005 she served a year and a half mission to Albania with her husband and loved working with the Albanian children. They also served in callings in the St. George Care Center and The Meadows, where her sincere caring ensured the trust and acceptance of all she worked with. All called her a “saint”. She is survived by her husband Donald, her eight children: Keith (Janet), Susan (Alfred Stucki), Gina (Michael Fogarty), Thomas, Brian (Elizabeth), Alan (Kathy), Karen (Nathan Moore), and Brent as well as sister Leona Schmutz. She has 35 grandchildren, two deceased: (Carrie Stucki and Kimberly Fogarty), and 27 great-grandchildren. Funeral services will be held Monday, October 4, 2021, at 10:00 AM at the 9th Ward LDS Chapel, 500 East 700 South, St. George. Viewings will be held Sunday, October 3, 2021, from 6:00 PM - 8:00 PM as well as on Monday prior to services from 8:30 AM – 9:30 AM at the same location.

Shirley Schmutz Larkin (87) passed away September 25, 2021, at her home in St. George surrounded by her husband and children. Shirley was born January 19, 1934, in Middleton (Washington) Utah in a small home on Highway 91. Her parents were Grant... View Obituary & Service Information

The family of Shirley Schmutz Larkin created this Life Tributes page to make it easy to share your memories.

Send flowers to the Larkin family.