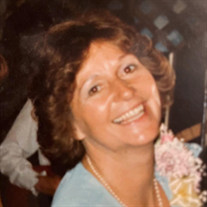 Shirley Reinecker, 88 passed away peacefully on April 16th after a six-and-a-half-year battle with Alzheimer’s. She was born on August 26th 1932 in St. Paul, Minnesota to Bert and Rose Robideaux. On June 27, 1953 she married the love of her life, Karl Richard Reinecker, in Northridge, California, where their mutual devotion to each other and love of music sustained them for over 67 years. Shirley started her life in St. Paul Minnesota and later moved with her family to Westchester, California in 1944. She met her future husband, Karl, while attending Inglewood High School and they later married in June of 1953. A devoted mother to four children, Shirley was a Girl Scout leader, Camp Fire Girls leader, Cub Scout Den Mother, and an Active member in the PTA. Shirley was also an accomplished musician and pianist and spent numerous years teaching other children in the neighborhood how to play the piano, as well as volunteering as in accompanist for the school choir. When her children were older, Shirley went back to school to earn a college degree and a Special Education Teaching Credential. She taught children with special needs for over 20 years for the Los Angeles School District. During her lifetime, Shirley touched many lives with her caring, generous, and loving nature. She was a devoted Catholic and attended Our Lady of the Valley church in Canoga Park and Our Lady of Perpetual Help in Castaic, California. Shirley is survived by her loving husband, Karl and their four children, Karl and his wife Cindy Reinecker, Mark and his wife Derene Reinecker, Karen and her husband Bill White, and Teresa Stine, there grandchildren, Colette, Alyssa, Camille, Ryan, Matt, Genessa, Tony, Catt, and Vinny, great-grandchildren Henry, Leland, Joey, Nora, Taylor, Aiden, Lucas, Danny, Damien, and Finnegan. She was preceded in death by her parents, Bert and Rose, and her sisters Robbie, Lucille, Mary and Joan. Funeral Services will be held Thursday, April 22nd at 10:00 a.m. with the Rosary preceding the Mass at St. George Catholic Church, 259 West 200 North, St. George, Utah, 84770. Following the services, the internment, and graveside service will be held at Hurricane City Cemetery, 225 East 600 North, Hurricane, Utah.

Shirley Reinecker, 88 passed away peacefully on April 16th after a six-and-a-half-year battle with Alzheimer&#8217;s. She was born on August 26th 1932 in St. Paul, Minnesota to Bert and Rose Robideaux. On June 27, 1953 she married the love of... View Obituary & Service Information

The family of Shirley Ann Reinecker created this Life Tributes page to make it easy to share your memories.

Shirley Reinecker, 88 passed away peacefully on April 16th after...

Send flowers to the Reinecker family.