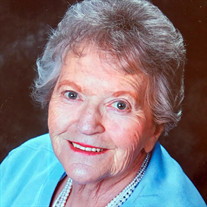 Sondra Lee Beckert Bartlett Rabideau Logan Sondra left us on December 15, 2019 to keep her audition for the Heavenly Choirs. She was born on a snowy morning, December 2, 1934 in Logan, Utah. She was the first child of six born to Charles H. and Edna R. Beckert. In her early years she lived in Logan, Brigham, and Roy, Utah. She was married to William H. Bartlett on March 18, 1952 and although they were later divorced, they had six sons who have grown into good and honest dependable men. On November 1, 1968 Sondra married R. John Rabideau. They lived in Fair Oaks, California and then relocated to Hurricane, Utah in 1997. Sondra lost John to cancer from Agent Orange. Sondra then married James R. Logan on April 20, 2001 in Hurricane where they have resided since that time. Sondra’s musical career began when she was three. She sang in local Programs and talent shows. In seventh grade she was invited to play her clarinet with the Box Elder High School Band. When she graduated from Weber High School she played twelve different instruments, lettered in music and played in the State High School Honor Band. She taught piano, clarinet, and accordion all her adult life. Music was her whole life. She sang with, directed or played for many programs, plays, and concerts. She has been part of performances for five LDS church Presidents. She also played the organ in the St George Temple for many years. She was a member of the Southern Utah Heritage Choir for ten years and traveled to various part of the word including singing at Carnegie Hall (a dream of hers). She finished her life as an active indexer for the church’s family search program. She is survived by her husband James Logan, five sons: Michael W (Jane) Bartlett, Kerry C (Debi) Bartlett, Kurby E (Mitzie) Bartlett, Chris R (Kathy) Bartlett, and Lucky W (Brenda) Bartlett, 24 grandchildren, and 39 great grandchildren. Also by her siblings Charles B (Olga) Beckert, Gayle B Wardle, Judy B Christensen, and Kent R (Sandy) Beckert. She was preceded in death by her parents, 2 husbands, her brother Gary Beckert, her #3 son Brett Bartlett, granddaughters Ellen, and Sondra, and grandson Michael. Services will be held in the Red Brick Chapel 274 South 100 West, Hurricane, Utah on December 21, 2019 at 1:30 pm. A Viewing will be from 12-1:15 pm in the Aaronic Priesthood room on the southwest corner of the building. Family and friends are invited to share tributes online at SerenityStG.com. Arrangements and memorial tree planting by Serenity Funeral Home of Southern Utah, 986-9100.

Sondra Lee Beckert Bartlett Rabideau Logan Sondra left us on December 15, 2019 to keep her audition for the Heavenly Choirs. She was born on a snowy morning, December 2, 1934 in Logan, Utah. She was the first child of six born to Charles H.... View Obituary & Service Information

The family of Sondra B. Logan created this Life Tributes page to make it easy to share your memories.

Send flowers to the Logan family.