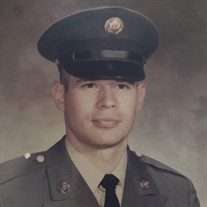 Sterling Edward “Ted” Fairbanks, loving husband, and father, passed away in his home in St. George, UT on October 24, 2021, at age 75. Born on October 28, 1945, in Ontario, Oregon to Sterling Voy Fairbanks and Anna Hansen Fairbanks; he was the fourth of nine children. Ted married the love of his life, Denise Lynn Doonan in the Oakland, California temple of the Church of Jesus Christ of Latter-Day Saints on April 13, 1968. They had an exceptional life together for 53 years. Ted had fond memories of his childhood. Particularly fond were the years on the farm in Moses Lake, Washington, where he and his siblings learned to work hard but also get into mischief-- like riding cows. Ted graduated from Paradise High School in 1964, and attended Yuba College, where he majored in art education. He served a mission for The Church of Jesus Christ of Latter-Day Saints, in the Western States from 1964-1966. Ted was a proud Vietnam veteran. He served honorably in the US Army from 1968-1971 specializing in Avionics Communication. During basic training, at Fort Lewis, he was honored as the distinguished recruit out of 5,000. He served in combat as a field lineman for the 1st Cavalry in Phu Loi, South Vietnam. He also served as an illustrator with the Division Information Office in Phuoc Vinh, where his drawings and paintings were featured in the division’s weekly newspapers, quarterly magazines, and in “Memoirs of the First Team”, a comprehensive history of the 1st Cavalry in Vietnam. He was wounded in combat and received the National Defense Service Medal, the Vietnam Campaign Medal with 60 honors, and a Vietnam Service Medal with 2 Bronze Service Stars. He was a member of the Veterans of Foreign Wars (VFW) post 2039 of Paradise, California and spent his time serving in the color guard. After the military, he made a career in the grocery business, working his way up to store director for Food 4 Less. Ted was truly passionate about two things in his life: his Savior Jesus Christ and his family. He showed his love for these two things through sacrifice of his time and energy -- his example spoke louder than words for this stoic man. Ted showed his love for his Savior through service and continuous learning. He was a lifelong faithful member of the Church of Jesus Christ of Latter-Day Saints, and he served in numerous callings in the church. Among his favorites was teaching. He loved to share what he knew about the gospel and especially church history. He has a vast library and would spend countless hours in daily study which led to a wealth of knowledge. As a husband, Ted expressed his love through small acts of kindness, being attentive, and spending quality time with Denise. As a father, he took time to teach his children to build and fix things, ride bikes and drive cars, fish and camp, play practical jokes and laugh loud. He also showed the importance of staying connected to family by sacrificing his vacation time for family getaways and extended family gatherings. Ted's memory will live on and be cherished by his remaining family: his wife, Denise Fairbanks; daughter, Julie Fairbanks; four sons: Michael Fairbanks, Sterling David (Julie) Fairbanks, Adam (Becky) Fairbanks, Steven (Jen) Fairbanks; sister, Marie (Weldon) Papa; two brothers: Douglas (Karen) Fairbanks, and Robert Fairbanks; 13 grandchildren: Ben Dees, Katie Dees, Ryan Fairbanks, Sarah Fairbanks, Sterling Tanner Fairbanks, Tori Fairbanks, Thomas Fairbanks, Ty Fairbanks, Cole Fairbanks, Owen Fairbanks, Logan Fairbanks, Veronica Fairbanks, Max Fairbanks; and one great grandchild, Nova Rayne Hall. The graveside service for family will be held on Tuesday, November 2, 2021, at 11 am at the Paradise, California cemetery, located at 980 Elliot Road Paradise, California, 95969. (Military Honors provided by the California National Guard). To attend the service remotely please visit https://teams.live.com/meet/93445077502974

The family of Sterling Edward Fairbanks created this Life Tributes page to make it easy to share your memories.

Send flowers to the Fairbanks family.