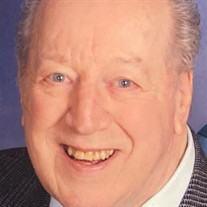 Steven was born in Warsaw, NY to Charles and Mary (Updyke) Gray. They later moved to Dansville, NY where Steven attended Senior High School. Steven had six brothers and sisters, all of which preceded him in death. Steven graduated from Dansville Central High School in 1956 and then enlisted in the US Navy as a yeoman. He spent most of his naval career in Patuxent River Maryland, and on the USS Saratoga (CV-60) traveling around the world. Steven was honorably discharged from the US Navy in 1960 and returned to Rochester, NY where he took up residency. In 1961 Steven married M Faye Maples and together they had two children, Tamera and Philip and resided in Webster, NY. In 1971 the little family moved to Sunrise, FL where Steven found employment in the Broward County School District, working there until 1984. Steven loved his job with the school system and the friendships he made with the teachers and children alike. Steven was also a City of Sunrise football and little league coach, and he spent his leisure time playing tennis with the teachers and their spouses from the schools he worked at. Steven also enjoyed going camping with family and friends in the family’s pop-up camper. After their children reached adulthood and moved out of the family home, Steven and Faye moved to Lake Lure, NC where Steven worked as a homebuilder and then as the Director of Public Works Department for City of Lake Lure. He also started his own handyman business as he enjoyed this type of work and was always willing to help where needed. While in North Carolina, Steven became involved in antique/classic cars. He owned six different classic cars, the first one being a 1940 Buick that was named “Miss Daisy” He and his wife joined the Great Smoky Mountain Region chapter of the AACA (Antique Automobile Club of America) and enjoyed the camaraderie and making itineraries for day and overnight trips for the club. After their retirement, Steven and Faye moved to St George, UT in 2012. They became members of Good Shepherd Presbyterian Church where they loved worshipping and the friendliness of the other church members. They resided in Sun River where they enjoyed the lifestyle of the retirement community and the many new and dear friends that they made. Faye preceded Steven in death in late 2019. Steven is survived by daughter, Tamera, and son, Philip, along with their spouses, and grand-daughter Mary Katherine.

Steven was born in Warsaw, NY to Charles and Mary (Updyke) Gray. They later moved to Dansville, NY where Steven attended Senior High School. Steven had six brothers and sisters, all of which preceded him in death. Steven graduated from... View Obituary & Service Information

The family of Steven Clark Gray created this Life Tributes page to make it easy to share your memories.

Steven was born in Warsaw, NY to Charles and Mary (Updyke) Gray....

Send flowers to the Gray family.