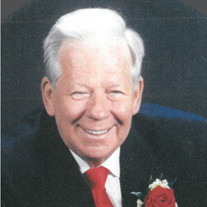 Born Virgil Tedro Yarbrough Jr., Ted was raised on a dairy farm in Bastrop, Louisiana. After graduating high school, he joined the U.S. Air Force in December 1951. He was stationed at Hill Air Force Base in Ogden, Utah, where he became a member of the Church of Jesus Christ of Latter-Day Saints and met and married his first wife. The best thing to come from that marriage was his two daughters, Teresa Yarbrough Orton and Jennifer Yarbrough Williams. He was then transferred to Casablanca, Morroco, Montana, Michigan, Brigham City, and eventually Pocatello, Idaho as an Air Force recruiter. While on a month of leave, a good friend who was the manager at the Chevrolet dealership asked Ted to come sell cars for him. That experience ended a 17-year career in the Air Force and began a 40-year career in the automobile industry. He saved money to purchase the Chrysler Plymouth dealership in 1970 and eventually got the Dodge, Dodge Truck, Honda, and Hyundai franchises as well. He had one of the largest and most profitable dealerships in the Denver Zone. His employees knew him as a mentor and an honest and generous boss who always gave more than he received. By his side through all of that was his sweetheart, Wanda Moorehead, who he married in 2000. He sold the dealerships in 2001 and retired. He and Wanda spent their retirement years travelling all over the world. A couple of his favorite trips were to China and an African Safari. They purchased a winter home in St. George, Utah, and spent the winters there until 2015 when they sold their home in Pocatello and moved to St. George full time. They served a mission in 2004 in the St. George Historic Sites Mission where he made many wonderful friends and was able to share his testimony of the restored gospel and the Savior. He loved to fish, goose hunt, snowmobile, and set up his model trains. He held many positions in the church including Sunday School Teacher to the 14-year olds and Sunday School President. He was a proud member of the NRA, Ducks Unlimited, and Gate City Rotary Club in Pocatello. Ted also loved being a Dodge National Circuit Finals Rodeo sponsor for almost twenty years. He is survived by his wife, Wanda, his daughter Jennifer (John) of Herriman, Utah; stepdaughter Dana (Gwen) of Boise, Idaho; grandkids Shaun, Shayla (Garret), Ryan (Julie), Elyse (Brad), Ashley (Anton), Adam (Erina), Brennan (Catherine), Laurel (Jordan); step grandchildren Matt (Holland), Andy (Abby), Katie (Jose); great grandchildren Annabelle, Jacqueline, Georgia, Livia, Ella, Jackson, Cooper, Pierce, Kennedy, Anya, Xander; and step great granddaughter Kalleigh. He is also survived by his siblings Jo Dupree, Jerry (Gerry) Yarbrough, and Jack Yarbrough. He was preceded in death by his daughter Teresa, granddaughter Chelsea, sister in law Juanita, and sister in law Elsie, brother in law Jimmy, and his parents, Virgil Tedro Yarbrough Sr. and Wilma Nolan Yarbrough. In lieu of flowers, the family requests donations be made to the Church of Jesus Christ of Latter-day Saints Perpetual Education Fund. Ted was always a big supporter of education for others and giving people a good start in life. Funeral services will be held on Saturday, December 28, 2019 at 11:00 am at the Bloomington Hills 6th Ward Building (750 East Ft Pierce Dr., St George, UT). A viewing will be held on Friday, December 27, from 6:30-8:00 pm and Saturday, December 28, from 9:30-10:45 am. Interment will be at a later date. Ted will receive military honors for his service to the country he loved.

Born Virgil Tedro Yarbrough Jr., Ted was raised on a dairy farm in Bastrop, Louisiana. After graduating high school, he joined the U.S. Air Force in December 1951. He was stationed at Hill Air Force Base in Ogden, Utah, where he became a member... View Obituary & Service Information

The family of Ted Yarbrough Jr. created this Life Tributes page to make it easy to share your memories.

Send flowers to the Yarbrough family.