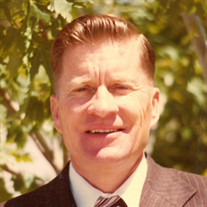 Tedd Rider Holman, 93, of Sugar City, Idaho, died in St. George, Utah surrounded by his loving family! Funeral Services will be in Washington, Utah at the LDS Chapel at 1867 Washington Field Road, Washington, Utah, on Thursday, May 17. Viewing will be from 9:30am to 11:00am with the funeral at 11:30. A viewing will be held at the Sugar City Stake Center (315 East 300 South) on May 19th from 12:30-1:30. Graveside services will be at the Sugar City Cemetery also on May 19 at 2:00pm. Tedd was born in Rexburg, on Sept. 13 1924 to Albert Loader Holman and Mary Rider. Tedd was the 12th child out of 13 children. He attended all 12 grades in Sugar City and graduated from Sugar High. He also graduated from Ricks College. He and the love of his life Donna Yvonne (Bonnie) Harris were married in the Idaho Falls temple on July 16, 1947. They have been married for 71 years. They have five children: Kenneth (Donna), Randy (Siri), Linda, Lori (Tom) and Brad. They also have an adopted son, Dustin, and a foster child, DuWaine Boone! He is the grandpa to many grandchildren and great-grandchildren who love and adore him! Tedd had a wonderful zest for life! He loved taking his family camping, fishing, hunting and many enjoyable family vacations! He had many skills and talents including being good at almost any sport and learning the carpentry trade so he could build his own homes and help build many for his children and family. He was a hard worker and held two full time jobs for over 30 years---He was the mail carrier in Sugar City and also worked at the State Youth Services Center in St Anthony, Idaho. Even though he worked so hard he found time to be with his family! He was a kind-hearted person, enjoyed people and made friends wherever he went! He liked everyone he met. He had a great sense of humor which made people want to be around him! He loved his family so much and loved to spend time with them. He coached the Sugar M-Men basketball teams for many years and took them all the way to the state and national championships! He lived his life in service to others. He honorably served his country in World War II, in the army, for 3 years! Part of that time as a parachute jumper. He was a member of the Church of Jesus Christ of Latter-Day Saints and was a great example of the teachings of our Savior! Tedd and Bonnie served a mission in England and another one in Mississippi! They have served together many years in the Idaho Falls temple! They have spent many years doing genealogy and have compiled many family history books on their ancestors. Surviving is his wife Bonnie, his children Ken, Randy, Linda, Lori, Brad, Dustin, and Duwaine and his sister Leora Dutson. Preceding him is his parents: Albert and Mary and his brothers and sisters: Albert, Darwin, Lorin, Marie, Norman, Norma, Bertella, Jack, Faye, Garth, and Ruth! He is having such a wonderful reunion with many family and friends! He will greatly be missed but we will cherish our memories and try to live as he lived!

The family of Tedd Rider Holman created this Life Tributes page to make it easy to share your memories.

Send flowers to the Holman family.