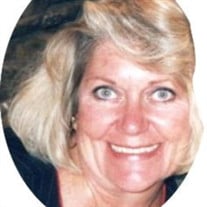 Teresa Ann “Annie” Vannelli, 72, passed away peacefully on February 8, 2021. She was born on February 23, 1948 in Salt Lake City, UT, to Elvin and Judith Hunter. Annie lived a good part of her life in California, where she obtained a cosmetology license and worked for short time as a beautician. Later, she obtained an Associates Degree in Early Childhood Education, which was to become her life’s work. Annie was employed by Vonnie’s World of Learning, a preschool, in St. George. Rather than just keeping her students occupied, she actually taught them and was proud of the fact that when her students entered kindergarten, they already knew their ABCs and could count to 100. Annie was fun loving and vivacious, and she would light up a room when she entered. Her huge, sparkling blue eyes gave the impression that she was plotting mischief, or at least a practical joke. Annie was a true friend, and if you were her friend, you could count on her being with you on the front lines of whatever battle you were fighting. Annie is survived by her son, Terin, of St. George; her niece, Tammy Hunter Henderson of Cedar City, UT; her grandchildren, Makayla Vannelli and Ryker Vannelli; and her love and partner in crime, Brent Cahoon of Beaver Dam, Arizona. She is predeceased by her parents; and her brothers, Richard Hunter and David Hunter. Anne’s Celebration of Life will be held on Saturday, February 27, 2021 at the Vannelli home at 239 S. 2100 East, St. George. Friends may contact her son, Terin, at 435-272-7445."

The family of Teresa Ann Annie Vannelli created this Life Tributes page to make it easy to share your memories.

Send flowers to the Vannelli family.