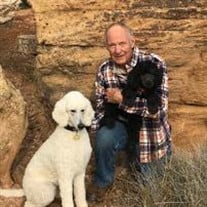 Thomas Paul Biddulph passed away early morning April 4 at his home in St. George, Utah in the company of close family and friends. Tom was born in Logan, Utah and spent most of his childhood years there. He attained a Bachelor's degree from Utah State University. Later in life returned to school where he earned a Master’s of Science in Computer Science from the University of California, Berkeley (Go Bears!). He was a pioneer and entrepreneur in the computer software field. He started as a UNIX programmer at Bell Labs in Ohio in 1977. At UniSoft, one of the early innovators in the UNIX market, he lead development as Vice President. In 1987, he co-founded an Internet software company, StarNine Technologies, in Berkeley filling dual rolls as CEO and head of Engineering. StarNine sold the first Commerce Web Servers for the Macintosh in 1995. He retired twenty years ago and returned to Utah where he settled in St. George in his mother's cherished home that she had designed with a glorious view of the mesa behind it. Tom had a lifelong love affair with nature, especially the southwest and the desert. He was an avid and accomplished photographer, documenting the splendor and austere beauty of the Utah landscape, and produced stunning black and white prints. He was a skilled snow skier, and took numerous helicopter ski trips with friends and family. He was also a talented woodworker, producing hand-crafted furniture, but his passion was producing Native American flutes, which he also learned to play. The Native Americans' respect and love of the land resonated with him through the creation and crafting of the flutes. Tom was fiercely independent. He loved his dogs, taking them for lengthy hikes every morning at dawn. His current companions, Kiva and Darth are missing him now. He enjoyed camping, hiking, and growing an amazing amount of vegetables in his home-greenhouse (his arugula and kale are amazing!). He regularly canned preserves, jams and jellies that he shared with friends and his holiday cookies were legendary. Tom enjoyed the company of close family and friends. Although Tom will be sorely missed, he has left an indelible impression within his circle. We love you Tom!

Thomas Paul Biddulph passed away early morning April 4 at his home in St. George, Utah in the company of close family and friends. Tom was born in Logan, Utah and spent most of his childhood years there. He attained a Bachelor's degree from... View Obituary & Service Information

The family of Thomas Paul Biddulph created this Life Tributes page to make it easy to share your memories.

Thomas Paul Biddulph passed away early morning April 4 at his...

Send flowers to the Biddulph family.