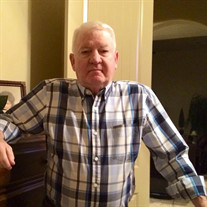 Thomas Benton Edmiston, resident of St. George, Utah, was taken to his heavenly home safe in the arms of Jesus November 18, 2020 at the age of 78 years old. He was born on October, 24, 1942 in Tulsa, Oklahoma to Rayburn And Maxine Edmiston. He was raised in Jenks, Oklahoma and went to Jenks High School where he met his life long love, Linda Lou Byard and they were married in 1962. They raised two daughters, Dana and Jennifer, who gave them two granddaughters, Britny and Emma. Tom worked in the sales industry most of his career where he met many good friends and colleagues. He never met a person he didnt smile at or try to help in some way. Tom made everyone’s life he touched a better place because of his positive attitude and hard working demeanor. Tom was a true Christian man who was a good example to many and taught many the value of kindness, giving and love to his fellow man. He loved playing golf and made many friends in his golfing years as well. Tom believed in never giving up and taught others that true hard work and perseverance can yield success. He was very successful in his career and home life because he loved his family and always put God first! He was very active in his church and served as deacon for many years. Tom is survived by his wife, Linda Lou Edmiston, daughter Dana and spouse Todd White and his younger daughter Jennifer and spouse Lee Bethel who reside in Henderson, NV and granddaughters Britny Sapp and husband Cory Sapp and Emma Bethel also in Henderson, NV. He is also survived by his brother Bob Edmiston and wife Christine who reside in San Antonio, Texas, sister-in-law Sue Ratcliffe and her husband John and brother-in-law Larry Byard and his wife Sam along with many nieces and nephews and friends who all loved him dearly. He was preceded in death by Ray Edmiston, Father, Maxine Gregory, mother, Norman Gregory, stepfather, and Bette Kennedy, sister. The family would like to thank you all for your love and support and friendship during this difficult time. Due to the coronavirus pandemic, services will not be held, however family and friends are invited to share condolences online.

Thomas Benton Edmiston, resident of St. George, Utah, was taken to his heavenly home safe in the arms of Jesus November 18, 2020 at the age of 78 years old. He was born on October, 24, 1942 in Tulsa, Oklahoma to Rayburn And Maxine Edmiston.... View Obituary & Service Information

The family of Thomas Benton Edmiston created this Life Tributes page to make it easy to share your memories.

Send flowers to the Edmiston family.