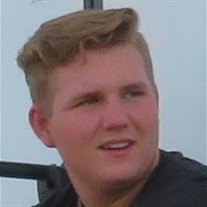 Triston Shawn Myers was born September 19, 2001, to Eric Myers and Angela Fjermestad. He was raised by his grandparents, Verril and Jackie Justice. Triston has three brothers and one sister, whom he loves dearly. Tyler, his older brother gave him his love, guidance, advice, and an occasional reprimand. They shared good times, bad times, and everything in between. Triston loved his two younger brothers, Teagan and Brody. They raised a raucous anytime they got together. His older sister Kayla he called often to talk and confide in since she lived far away in North Dakota. He is a Pine View kid with a great love for his Denver Broncos. He played elementary school soccer and was a lineman for Pine View Middle School. He decided not to play his sophomore year because he wanted to focus on his education. He made very close friendships with his teammates, coaches, and their friends. He was a vibrant, outgoing, and mischievous young man, but never did his grandparents worry when he was out and about with his friends. He always went above and beyond when doing anything with his friends. Triston was a fun, generous, loving, caring, (and a knuckle-headed at times), young man with a heart of gold. He loved staying fit, working out, hunting, fishing, hiking, any outdoor activity, and being with his friends as often as possible. He lived for the time he could spend with his Aunt Desireé and Uncle Vince. They shared many adventures and gave him unconditional love and guidance. Mattie, Riley, Brenden, Isabella, and Mia were not just cousins, but were as close to him as siblings. He loved his aunts and uncles: Jason, Eric, Trisha, Sonny, Amanda, and his great-grandma Carter, and would eagerly join them in family fun. Triston was a people person and has a huge family full of not just relatives, but friends as well. The family requests no flowers be sent, instead, please send donations to suicide or depression non-profit organizations.

Triston Shawn Myers was born September 19, 2001, to Eric Myers and Angela Fjermestad. He was raised by his grandparents, Verril and Jackie Justice. Triston has three brothers and one sister, whom he loves dearly. Tyler, his older brother gave... View Obituary & Service Information

The family of Triston Shawn Myers created this Life Tributes page to make it easy to share your memories.

Send flowers to the Myers family.