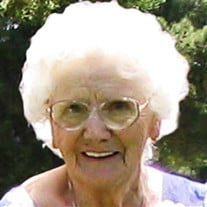 Vera Hildegard Giehr Bauer Bensch Rowley Vera Rowley passed away at her home in Hurricane Utah, Friday the 18th of January, 2019, at the age of 95 after a life well lived. She was born, on October 14, 1923, in Konigsberg, East Prussia, to Willie and Margret Giehr. She was the youngest of two daughters, little sister to Ellie. The majority of her childhood was spent in Berlin, Germany where her family was active in the Church of Jesus Christ of Latter-day Saints. She married Otto Bauer on March 10, 1941. Their time together was cut short when he was sent off to war after only a few days of marriage. Nine months later, Otto was killed in action on Dec 15, 1941. Vera always burned a candle in the window during the month of December in his memory. On January 18, 1949, she married Otto Bensch, whom she had known since grade school. They had 2 children; Angela and Norbert. After surviving World War II in Berlin, Germany, Vera bravely decided to immigrate to the United States. Her husband Otto had come to the states earlier, so alone, she traveled to Bremen, Germany and boarded a ship named Gripsholm to bring her 2 very young children to America. They departed on December 30, 1952. After being in the states a short time, Otto and Vera’s marriage ended. Being the self-reliant soul that she was, she raised her children on her own working several different jobs to support them. Her favorite job was working for Russell’s ice cream. Oma was not afraid of hard work. She never backed down from a difficult task and was an example of resilience, self-reliance and thrift to all who knew her. Vera raised her children in the Salt Lake Valley and after retiring from formal work, moved to Hurricane Utah where she loved gardening and serving. She kept very busy with serving at the Senior citizens center, the Hurricane Valley Museum and whatever opportunity she could find to help and lift those who were having difficulties. She always watched out for the underdog and went out of her way to serve wherever she saw a need. She had a deep love for this country and believed it was your duty to be a good community member. She participated in and supported local activities and government. She loved the outdoors and took opportunities to travel and see the world. On her Birthday’s, the only thing she wanted to do was go on a picnic, or hike or drive in the mountains. For example, even her 85th birthday was spent hiking up in Kolob Canyons. Later in life she married Cecil T. Rowley. Their shared love for gardening and the outdoors had brought them together and they enjoyed building a home and landscaping their yard together. They were married from 1996 until the time of his death on Dec 17, 1999. Vera was a lifelong member of the Church of Jesus Christ of Latter-day Saints and served in various callings. On November 21, 2005, Vera was able to go to the temple for the first time at the age of 82. She loved being in the temple and attended as regularly as her health allowed. She is survived by her daughter Angela Newbold, Grandchildren: Jeremy and Jennifer (Children of Norbert) and Julie and Kimber (children of Angela). Her step children: Linda (Dallas) Linford, Dick Rowley, Sally Montgomery, Ceil Stevenson, Robert (Phoenix) Rowley, Dixie (David) Hatanaka and several step grandchildren and great grandchildren. She was preceded in death by her parents and older sister, her husbands, her beloved son Norbert and her Great Grandson Michael. It was a blessing to have her in our lives! Thank you to her caregivers from “A Gentle Touch Home Care” who nurtured her at home and showed her so much love this past year. Thanks also to Encompass Hospice workers who enriched her life and cared so well for her.

Vera Hildegard Giehr Bauer Bensch Rowley Vera Rowley passed away at her home in Hurricane Utah, Friday the 18th of January, 2019, at the age of 95 after a life well lived. She was born, on October 14, 1923, in Konigsberg, East Prussia, to... View Obituary & Service Information

The family of Vera Hildegard Rowley created this Life Tributes page to make it easy to share your memories.

Send flowers to the Rowley family.