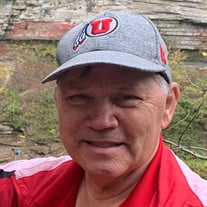 The family of Von Young Moody of Washington, Utah is saddened to announce his passing on September 26, 2021, at the age of 70 years. Von Young Moody became the ninth child and seventh son to Emerald Lester Moody and Mary Young born on February 11, 1951, in Payson, Utah. He earned the nickname of “Laughing Boy” as a child because whenever people gave him any attention, he would give them a big smile and start laughing. Throughout his life Von always found ways to make people laugh and he always found humor in the things around him. He is known for his infectious laugh and smile. In November of 1961, Von was rushed to the hospital to learn he had diabetes. Luckily, he survived the coma he was in, and has since been recognized as one of the longest living diabetic on record! Von enjoyed music and theatre in high school. He was in many musicals and loved getting laughs from the audience playing the lead roles of Hugo in “Bye, Bye, Birdie” and Denny in “It’s a Great Life!” He began singing in the 8th grade choir and upon graduation traveled to Europe with the I.C.E.S. (International Culture Exchange School.) He graduated from Delta High School in the top twenty of his class. Von had a strong belief in God and that he hears and answers prayers. He had a firm belief in the restoration of the Gospel and as a youth he was baptized and confirmed as a member of The Church of Jesus Christ of Latter-Day Saints. He earned his Duty to God Award and Eagle Scout. He served a two-year mission for the church in the California Central Mission. He served valiantly in many callings, but his favorite was leading the music in Sacrament meetings to the ward members alongside his wife, who followed his quick baton on the organ! His biggest pet-peeve was when hymns were sung too slow. He’d always be humming a measure or two quicker than what was being sung! Von loved visiting and serving in temples. He worked in the St. George Utah Temple for several years. Von enjoyed sports and played tennis with his brother, Layne, racquetball with his brother, Richard, and skied with his friend, Tom. He was the athletic manager for his high school football, basketball, and track teams. He was an excellent statistician and loved helping the coaches. He was an avid Ute fan and could tell you all their stats and all the other colleges as well. Von earned his B.S. degree from Weber State College and M.S. equivalent degree in Pharmaceuticals from University of Utah. He served as an excellent Pharmacist for 40 years in various pharmacies along the Wasatch Front, Uintah Basin, and Washington County. Von met his sweetheart at a choir rehearsal in the Institute of Religion at Weber State College and they were married in the Salt Lake Temple on June 10, 1977. Singing is what brought them together and that is what they have enjoyed doing together ever since. They sang with the Weber State Institute Choral and Men’s & Women’s Chorus. They sang in the Mormon Youth Chorus and when they moved to Southern Utah, they continued singing together in the Heritage Choir. They have been fortunate to travel on musical tours with the choir to China, Ireland, Europe, and Italy. They shared their musical talents with their children, Melissa, flute; Melody, viola; Emily violin & piano, Daniel, Saxophone; Samuel, drums; Benjamin, bass, and Jordan, violin. Music brought much joy and happiness to Von throughout his life. Von loved life and was always up for an adventure. He especially enjoyed playing with his own children and his grandchildren. After having three girls and three boys of his own, he chose to adopt two granddaughters. His children and grandchildren gave him great joy. Von is survived by his wife of 44 years, Darlene Jane Poll, and their children Melissa (Christoff) Orr, Melody, Emily (Gary) Nunley, Daniel (Aimee) Moody, Samuel (Maria) Moody, Benjamin (Steph) Moody, Jordan Moody, Tabitha Moody, and 27 grandchildren. He is also survived by his siblings: Lester (Joan) Moody, Andrea (Jack) Neilson, Ken Moody, Paul (Joy) Moody, Alison (Ross) Johnson, Jon (Susan) Moody, Layne (Leann) Moody, and Elizabeth (Brent) Hellewell. Von was preceded in death by his parents Emerald Lester Moody and Mary Young and brothers: Richard (Carolyn) Moody, and Ralph (RhoAnne) Moody, grandson Gabriel Moody, and daughter-in-law, Harmony (Gwen) Rasmusson Moody. Funeral services will be held on Saturday, October 2nd at 11:00 am at the Northbridge Ward building, 1080 West Arlington Street, Washington, Utah. A viewing will be held on Friday, October 1st from 6:00-8:00 pm and Saturday, October 2nd from 10:00-10:45 am at the Northbridge Ward building. Interment will be held at Washington City Cemetery.

The family of Von Young Moody of Washington, Utah is saddened to announce his passing on September 26, 2021, at the age of 70 years. Von Young Moody became the ninth child and seventh son to Emerald Lester Moody and Mary Young born on February... View Obituary & Service Information

The family of Von Young Moody created this Life Tributes page to make it easy to share your memories.

The family of Von Young Moody of Washington, Utah is saddened...

Send flowers to the Moody family.