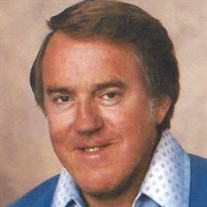 Wesley D. Webb, 87, of St. George, Utah was ushered into heaven on February 10, 2019. He was born in Salt Lake City, Utah, September 3, 1931 to Thyra E. and Athol M. Webb. He married Stephanie Cisar in 1997. Wes graduated from Granite High School in 1949. In 1954 he earned a degree of Bachelor of Science, in accounting, from the College of Business, University of Utah. He was a member of the Beta Gamma Sigma honorary business fraternity. Upon graduation Wes began his professional career as an accountant with Siegel Financial in Salt Lake City retiring as their Chief Financial Officer. At the age of fourteen, his father, Ott, taught him to fly giving birth to his lifelong love affair with airplanes. He loved flying and spent weekends traveling to Mena, Arkansas procuring aircraft for his airplane business. While he owned numerous aircraft, his favorite was a Staggerwing Beech. He served his country as a loyal member of the Air National Guard (Reno, Nevada) and, alongside his father, as a member of the Civil Air Patrol (Utah). Life provided numerous opportunities for Wes to become an entrepreneur and he eagerly took advantage of it. Among his diverse business adventures he began purchasing drive-in movie theatres and at one time was the largest single owner/operator in the United States. Wes was an avid hunter, bagging numerous trophy deer and elk in the mountains of his beloved Utah. At every opportunity he would regale you with his conquests. Wes enjoyed traveling, especially cruising, loved West Highland White Terriers, crossword puzzles, cigars and Drambuie. A complete listing of his pursuits would fill the entire newspaper, suffice it to say he lived a life most of us only dream of living. He is survived by his wife, Stephanie; his children, Kris (Jim) Neal, Clark (Kathleen) Webb; grandchildren, Stefan, Leah & Dylan; great-grandson, Graysen, his loving sister, Elaine (John) Mitchell; stepsons, C.J. Cisar, Joshua Cisar. He is preceded in death by his daughter, Diana Webb Jergensen. A celebration of his life will be held this Saturday in Saint George, Utah. Per his wishes, Wes was cremated and his ashes spread where he loved to be-the ocean.

The family of Wesley D Webb created this Life Tributes page to make it easy to share your memories.

Send flowers to the Webb family.