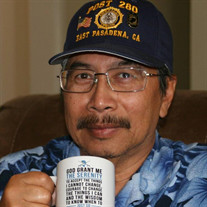 Wilhelm (Bill) Oor passed away unexpectedly on March 27, 2019. He was born March 24, 1950 in Surabaja, Indonesia. He is survived by his wife and life partner, Patricia Wieand and two sons, Michael (Heidi) and James. Bill and Pat were married on Thanksgiving Day 1972 in Pasadena, California. Bill loved living in Utah. He loved the great outdoors with a passion for camping, hunting and off-roading (rock crawling). He loved to eat. One of his favorite places was the American Diner, where the staff always made him feel special and treated him like family. Bill easily made friends, talking to anyone and everyone he met. He loved sharing his vast knowledge of firearms on his frequent visits to C-A-L Ranch, Sportsman’s Warehouse (where he was known as Willy) and Beaver Sport. He lived most of his life in Southern California, where he felt honored to ride his beloved Harley with The American Legion Riders. He retired in 2012 after 22 years with Pyro-Comm Systems, settling in Enoch to be closer to family, including Benny Koehl whom he thought of as a brother. In addition to his wife and sons, he is survived by his sister, Lorna Mackun and brother-in-law Ed Mackun, brother Hans (Peggy), nephew Frank Tanner (Anna) and many cousins as well as his 3 sisters-in-law, Fredda (Chick), Kay, Shirley (Jim), nephews, nieces and several lifelong friends, especially Roy Van Westbroek whom he also considered a brother. Bill was preceded in death by his parents, Harry and Charlotte Oor, sister Margareth Oor and nephew Chris Tanner. Bill lived everyday by his motto; GOD, FAMILY and COUNTRY! There will be a Celebration of Life on Saturday, April 20th from 2pm-6pm at the Cross Hollow Stake Center, 2610 Cody Drive, in Cedar City, Utah (Just south of Diamond Z Arena).

Wilhelm (Bill) Oor passed away unexpectedly on March 27, 2019. He was born March 24, 1950 in Surabaja, Indonesia. He is survived by his wife and life partner, Patricia Wieand and two sons, Michael (Heidi) and James. Bill and Pat were married... View Obituary & Service Information

The family of Wilhelm Oor created this Life Tributes page to make it easy to share your memories.

Send flowers to the Oor family.