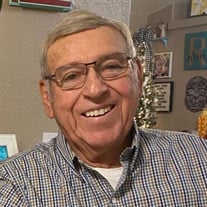 Manuel J Gonzales passed away on Saturday, January 9, 2021 in St. George, UT with his loving wife by his side. Manny was born on March 31, 1938 in Chama, NM to Tiofilo and Asucena Gonzales. He married the love of his life and high school sweetheart, Shirley Ann Carter, on August 24, 1957 in Ely, NV. Manny graduated from Carbon High school in 1957 and attended Carbon College. He excelled in four sports earning him the nickname Speedy Gonzales. In 1960, they moved their family to Salt Lake City, UT where he worked in the tire business. He was president of Granger Ute Conference Little League Football. In addition, he coached many of his sons’ sports teams. Manny and his family enjoyed many outdoor activities including hunting, fishing, camping and traveling. He was a ringer at horseshoes and always carried a high bowling average. He excelled in everything he did. Manny was an avid UTES fan and never missed a football game. They moved back to East Carbon, UT in 1982, where he went to work in the coal industry. Manny and Shirley managed the Sunnyside Golf Course where he picked up the love of another sport, golf. He was active in the Catholic Church and became a Fourth Degree Knight in the Knights of Columbus. In 2005, Manny and Shirley made the move to sunny St. George. He was active in the Creekside community and became President of the HOA. In Shirley’s words, “Manny never met a stranger”! Later in life, Manny and Shirley were able to spend winter months in Yuma, AZ traveling and checking things off their bucket list. He is survived by his wife, Shirley, of 63 years, his children: Mike (Michelle), Murray, UT; Mark “Gonzo” (Lyn), Leeds, UT; Martin (Cheri), South Jordan, UT; Stacy Terrell (Shaad), St. George, UT; 15 grandchildren, 14 great-grandchildren, and 1 great great-grandchild; siblings JR (Kathy), Grand Junction, CO; Arlene Vigil (Floyd), Riverdale, UT; sisters-in-law Mickie Nordin & Rose Carter, Murray, UT; and many other family members and close friends. He is preceded in death by his parents, Tiofilo and Asucena Gonzales, 8 siblings, 2 grandsons, his in-laws Jim & Stella Carter, and brothers-in-law. Manny leaves a legacy of kindness, caring and giving to others. In lieu of flowers, please continue his generous spirit by helping family, friends and neighbors. A private family viewing was held on January 11, 2021. Considering the current situation, a celebration of life will be held for Manny later at a date that is yet to be determined. We look forward to a time when we can gather safely and honor his legacy with family and friends.

Manuel J Gonzales passed away on Saturday, January 9, 2021 in St. George, UT with his loving wife by his side. Manny was born on March 31, 1938 in Chama, NM to Tiofilo and Asucena Gonzales. He married the love of his life and high school sweetheart,... View Obituary & Service Information

The family of Manuel Joe Gonzales created this Life Tributes page to make it easy to share your memories.

Send flowers to the Gonzales family.